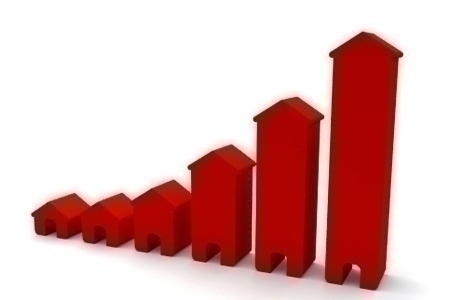 In recent housing news, the latest Standard & Poor’s/Case-Shiller Home Price Index tracked a 0.8 percent rise in February based on a seasonally adjusted basis. This is slightly better than the predictions of national economists; A Reuters poll of economists had forecast a 0.7 percent rise.

Nationwide home prices were up 12.9 percent on a year-over-year basis, and while the numbers—released on Tuesday– seem to indicate a healing market, the U.S. home prices were actually nearly unchanged in February, after slumping 0.1 percent in each month since November, according to the 20-city composite index. The 12.9 percent year-over-year February basis, while seemingly positive, actually shows that price growth is slowing down. Numbers were down from 13.2 percent in January, and fell even further from the peak of 13.7 percent in November. Additionally, the percentage lands just a smidge shy of the predicted year-over-year basis, which had weighed in at an expected 13 percent.

“Despite continued price gains, most other housing statistics are weak,” said David Blitzer, chairman of the index committee at S&P Dow Jones Indices, who cited new and existing home sales data. “The recovery in housing starts, now less than one million units at annual rates, is faltering. Moreover, home prices nationally have not made it back to 2005.”

Zillow Chief Economist Dr. Stan Humphries, commented, “Like pending homes sales numbers yesterday, the Case-Shiller numbers today are generally pretty positive. Behind the flat unadjusted monthly change is a large seasonally adjusted change in home prices. It’s good to have some positive signs amidst some of the sluggish news of late,” “The housing market is showing signs of slowing, but this was expected and is part of a broader return to normal as appreciation slows down, mortgage rates inch up and more balance between buyers and sellers emerges. Homeownership still represents a good bargain for those that can afford it and can find a suitable home. But affordability issues are becoming an issue in a few markets, and those problems will only get worse as mortgage interest rates rise.”

Pending Sales Change Course
In other real estate news released this week, the Pending Home Sales Index (PHSI), a forward-looking indicator based on signed contracts, increased 3.4 percent in March to 97.4 from an upwardly revised February level of 94.2. The PHSI monthly increase reported by the National Association of REALTORS® was the first since June of 2013, although it remains 7.9 percent below the level of 105.7 last March.

Last week, Census reported a 14.5 percent decrease in March new home sales. Extreme weather was a factor in decreased new and existing home sales at the beginning of the year. The March increase in the PHSI suggests that the existing home market will move forward throughout the spring. The growth in household formations and strong pent-up demand will maintain that momentum throughout this year.