Hottest Summer for Housing in 10 Years

Mixed Race Father and Son Celebrating with a Piggyback in Front of House and Sold Real Estate Sign.

Confirming a record-breaking summer, the residential real estate market has kept the temperature up with the hottest July in a decade, according to new data on inventory and demand on realtor.com®. Homes for sale in July are moving two percent more quickly than last year as prices continue to hit new record highs.

“The best spring in a decade has transitioned into the decade’s hottest summer,” says Jonathan Smoke, chief economist of realtor.com. “Pent-up demand left over from two years of tight supply against the backdrop of mortgage rates near three year lows have encouraged buyer activity at a time when sales usually begin to decline. While prices are higher as a result of the strong demand and limited supply, the lower mortgage rates are neutralizing the impact on purchasing power.”

The median age of properties on realtor.com in July is expected to be 68 days, one day faster than last year but three days slower than last month, a normal seasonal shift. July typically sees inventory age increase as the level of inventory peaks for the year and sales begin to decline.

The median home was listed for $251,000, seven percent higher than one year ago and one percent lower than last month. While that is the first price decrease since January–typical for the seasonal shift–it is a record high for July.

For-sale housing inventory is still growing on a monthly basis, and will soon peak for the year. However, total inventory remains lower than one year ago and the estimated 500,000 new listings expected at the end of the month will once again fail to bring enough relief to buyers looking for the right home.

“The confluence of fast-moving inventory and high prices for sellers combined with strong purchasing power for buyers will be hard to repeat in future summers,” says Smoke. 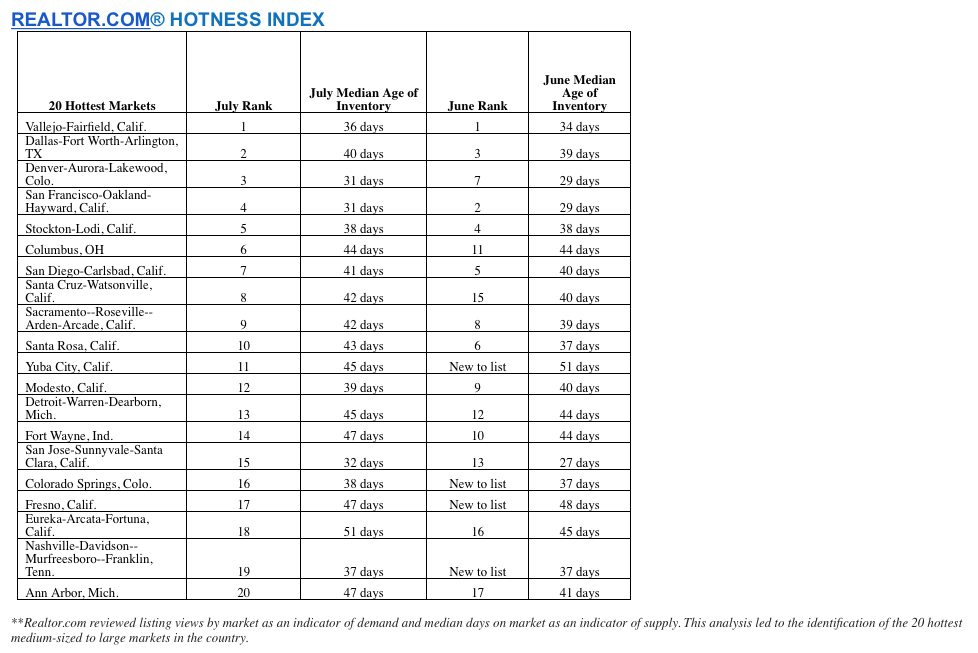