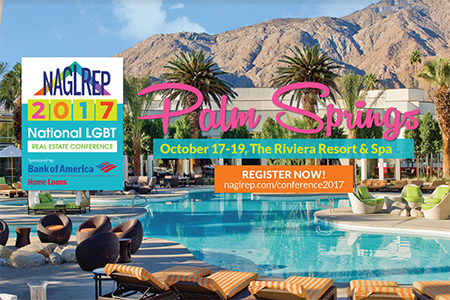 The National Association of Gay and Lesbian Real Estate Professionals (NAGLREP) will celebrate its 10th anniversary during June’s LGBT Pride Month. As I look back, I am amazed at the growth of our organization, and, even more importantly, society’s recognition and acceptance of the LGBT community.

It was about one-and-a-half years ago when the U.S. Supreme Court ruled in favor of the landmark case Obergefell v. Hodges, bringing marriage equality to our great nation. Ironically, the namesake of the case, Jim Obergefell, is a member of NAGLREP and also a Coldwell Banker West Shell agent in Cincinnati. That was a monumental moment, but, amazingly, the LGBT community remains unprotected from discrimination in numerous areas, including housing.

NAGLREP recently held our first LGBT Housing Policy Summit in Washington, D.C., where we discussed areas of opportunity and concern. While we met knowing our past gains have been somewhat tempered by the new administration, we left D.C. with renewed energy, as we were fortunate to speak with two U.S. Congressmen, David Cicilline (D-RI), co-chair of the Congressional LGBT Equality Caucus, and Scott Taylor (R-VA). Both outlined the importance of their separate pieces of legislation, which would eliminate discrimination based on sexual orientation and gender identity.

Mr. Cicilline, who gave the event’s keynote address, explained how he will soon re-introduce The Equality Act to prohibit discrimination against the LGBT community in public accommodations, housing, employment, federal funding, education, credit, and jury service.

Mr. Taylor, who met with us on Capitol Hill, submitted his bill on March 9 (House Resolution 1447), which would “extend protections of the Fair Housing Act to persons suffering discrimination on the basis of sexual orientation and gender identity.”

NAGLREP immediately endorsed both bills and called upon the National Association of REALTORS® to do the same. We asked our Summit sponsors, which include powers like Wells Fargo Home Mortgage, Union Bank, Freddie Mac and Long and Foster Real Estate, along with some of the largest real estate brands, companies, lenders and other ancillary services, to also support them. The response has been positive. Please join us in sending letters to state and local associations.

The Housing Policy Summit was a monumental event in our 10th anniversary year. Not only did we have critical discussions with two esteemed members of Congress, but our membership gained a unique perspective of how we can all impact the future of housing rights in our country. Both Mr. Cicilline and Mr. Taylor explained they introduced their bills for the simple reasons that they are the fair and right thing to do. We couldn’t agree more!

This momentum will carry over as we plan for our 4th annual LGBT Real Estate Conference on October 17-19 in Palm Springs. We are expecting more than 700 to attend, making this the largest LGBT and allies event in real estate history. Real estate luminaries such as Gino Blefari, CEO of Berkshire Hathaway HomeServices; Sherry Chris, CEO of Better Homes and Gardens Real Estate; Anthony Hitt, CEO of Engel and Völkers North America; Madison Hildebrand of Million Dollar Listing Los Angeles; and many others are scheduled to speak.

I urge you to attend, and embrace the LGBT community, which has become a viable part of our nation’s economic engine. A recent report from Witeck Communications found that approximately 7 percent in the U.S. self-identified as LGBT, with a disposable income of nearly $1 trillion. This is more than the Asian-American community and near the African-American and Hispanic levels.

While not everyone aspires to be an advocate, we recognize the increasing economic impact of the LGBT community makes NAGLREP an even more important partner than ever before.

I thank you for joining NAGLREP in celebrating our 10th year.

Jeff Berger is the founder of the National Association of Gay and Lesbian Real Estate Professionals (NAGLREP).

5 Ways the Inflation Reduction Act Can Cut Your Energy Bill

An Essential Addition to Your Brokerage Bag of Tricks

5 Ways to Earn Referrals This Autumn