In the lead-up to the recession, flipped homes made up 11.3 percent of sales in the U.S., according to CoreLogic data. In the fourth quarter of 2018, flips jumped to 10.9 percent—the highest for a fourth quarter on record, and inching toward the pre-recession rate.

Hardly, says Ralph McLaughlin, deputy chief economist at CoreLogic, which analyzed house-flipping in a recent report. According to McLaughlin, flips are not as risky as they were, in part because of more established and experienced flippers in the market. Back in the third quarter of 2005, business entities were behind 11.4 percent of flips, CoreLogic’s records show. Thirteen years (and the Great Recession) later, in the third quarter of 2018, that figure sprung to 41.2 percent.

Are iBuyers—who buy homes outright, rehab and unload them—moving the needle? It’s possible. Zillow alone, through its Offers program, estimates it will be buying 5,000 homes a month in as little as three years.

“It’s tough to tell given the myriad of purchasing entities that iBuyers are using to buy homes, but at least some of the increase is likely due to their presence,” McLaughlin tells RISMedia. “However, much of the increase in flipping is from the emergence of long-term flippers, who take a year or longer to complete a flip, which indicates the recent increase is probably due to more than just the growing iBuyer segment.”

Geographically speaking, there’s a dichotomy between where flips are more popular and where they’re more profitable. According to the analysis, activity is buzzing in the lower third of the U.S., with Birmingham, Memphis and Tampa especially hot: 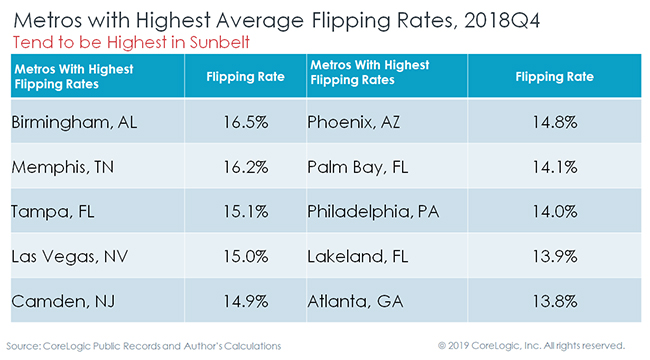 By comparison, across major markets in the Midwest and Northeast, there are fewer flips as a percentage of sales, with three Connecticut metros, Pittsburgh and Springfield on the other side of the spectrum.

As with any trend, there are outliers: 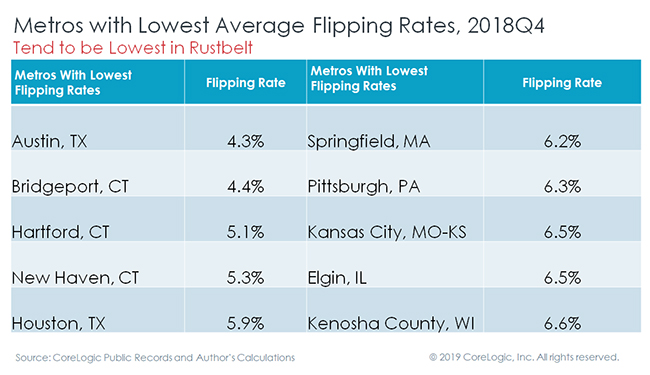 When it comes to profits, the best deemed “economic” returns—which don’t account for appreciation—are in the Rust Belt, where cities like Detroit, Philadelphia and Pittsburgh have potential: 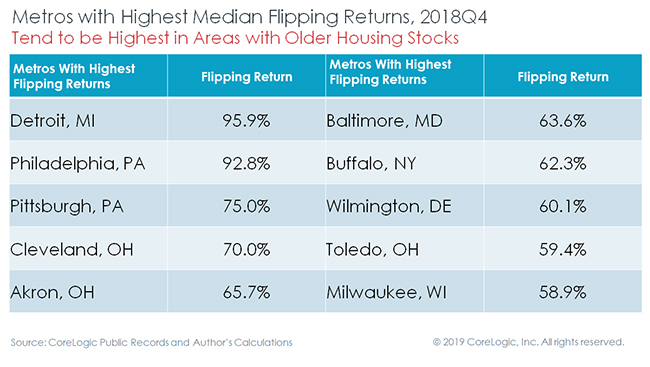 When considering economic returns, the lowest are spread through the Sun Belt—but that doesn’t tell the entire story. Homes are newer in the South, typically, and less likely in need of a complete demo or gut job, unlike those in the Rust Belt, which are often older and require structural upgrades: 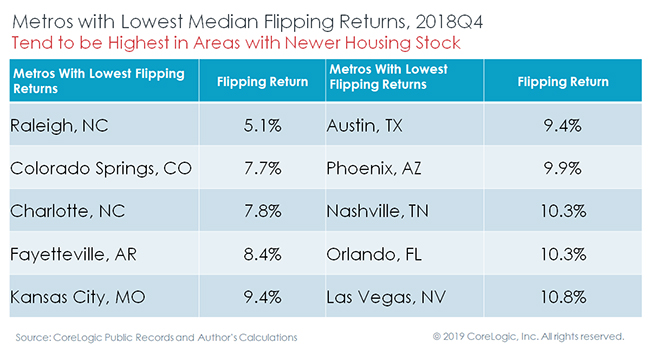 “We find that age is a large predictor of realized gains across metropolitan housing markets, and is likely because older homes offer flippers more of an opportunity to add value to a property when compared to newer homes,” explains McLaughlin.

As for the future, the house-flipping outlook remains stable, bolstered by the gradual growth in inventory and lower mortgage rates. According to the National Association of REALTORS®, existing-home inventory expanded in February, and based on data from Freddie Mac, the expectation of increasing interest rates isn’t panning out as predicted this year.

“We expect flipping rates to hold steady or possibly increase slightly, given the recent decrease in mortgage rates and recent increase in home inventory,” McLaughlin says.

5 Ways the Inflation Reduction Act Can Cut Your Energy Bill

An Essential Addition to Your Brokerage Bag of Tricks