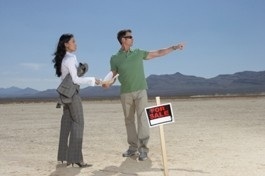 RISMEDIA, June 1, 2010—(MCT)—Although the situation is open to interpretation as well as change, there are growing concerns that the effects of this economic downturn could have a long-lasting effect on the housing market.

A study by the Mortgage Bankers Association, conducted by Kentucky economics professor Joe Peek, concludes that “the current financial crisis and recession exceeded the devastation created by other post-World War II recessions.”

Saving rates have risen substantially. Many Americans will continue to cut spending sharply out of necessity, “others out of fear of what the future holds,” Peek said.

When it comes to housing, he said, it was unlikely that the dramatic rise in loan delinquencies, foreclosures and bankruptcies would show a “meaningful” decrease in the foreseeable future.

“High unemployment and low house prices are widely projected to remain for an extended period, as well as the rise in problem loans at banks that will restrain their willingness and ability to provide credit,” Peek said.

Two groups expected to feel the pinch the most are young first-time buyers and the so-called active-adult purchasers who downsize as their children grow and move out.

“The impact of a higher unemployment rate for Americans ages 16 to 24 could have a lasting effect on lifetime earnings and attitudes toward risk and social policies,” Peek said.

In addition, those nearing retirement are delaying it and re-entering the labor force “in an effort to rebuild some of the retirement wealth that was wiped out by the recession,” he said.

The housing industry had been banking on both of these groups to sustain growth during the coming decades—especially the empty-nester baby boomers.

“The tougher economic circumstances for twenty-somethings and fifty-somethings will weigh on housing demand over the coming decade,” said Mark Zandi, Moody’s Economy.com chief economist in West Chester, Pa. “The first-time buyer and second-home markets would be most directly impacted.”

Economist Patrick Newport of IHS Global Insight of Lexington, Mass., said that Peek’s assessments “are a lot more dismal than ours, and ours is hardly rosy.”

He said today’s housing market “is imposing a bit more discipline by requiring bigger down payments and better credit scores for buying homes.”

The financial-reform package passed recently by the Senate includes provisions that, in addition to restricting prepayment penalties and controlling mortgage-broker compensation, would force lenders to consider applicants’ income, assets, and credit history before making a loan. If this change is permanent, perhaps homeownership rates will come down to pre-1995 levels—the year they started to climb. “I do not think this would be such a bad thing,” he said.

The homeownership rate slipped to 67.2% in the first quarter of 2010—its lowest reading since the first quarter of 2000. Homeownership rates averaged 64% from 1985 to 1994, but accelerated in 1995 because of government policies that encouraged homeownership, especially for previously underserved low- and moderate-income buyers. Rates reached record highs of 69% “because of easy lending during the housing boom,” Newport said.

Although it is probably likely that the lack of good-paying jobs will delay the entry of the current 16- to 24-year-olds into the home-buying market, “it’s less clear what effect the reentry into the workforce of baby boomers is going to have,” said Rick Sharga, chief economist of RealtyTrac.

“In some cases, this may keep inventory levels down, as the boomers stay in their current homes while going back to work,” Sharga said. “On the other hand, they may opt to ‘trade down’ in an effort to maximize their retirement dollars while they’re replenishing their IRAs and 401(k) accounts,” he said. “At best, this all suggests a pretty slow, marginal recovery over the next few years,” Sharga said.