Shooting for the Edit: Getting Good Coverage 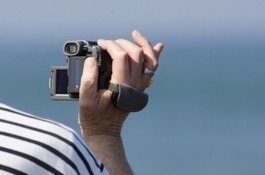 When I say the word coverage, I absolutely do not mean your cell reception. Put your phone away and pay attention to the star here for a minute. Coverage here refers to the amount of footage you shoot of your scene, and trust me, if you don’t get enough coverage during production you’re going to be throwing clumps of your hair around your editing bay when you get into post.

If you’ve done proper preproduction on your script, you should have a pretty good idea of how it’s going to edit together. If not, don’t go out shooting and hope for the best. But if you’re ready, go start shooting. Coverage means having multiple angles of the same action in a scene. For example, let’s look at a really simple scene of two people sitting at a table having a conversation.

Generally, you start with what would be called a master shot, or a wide angle shot that covers everything in the scene from start to finish. No, that doesn’t mean you need to have your amateur actors memorize the entire script word for word and spout it off in one amazing take. Just make sure you get decent sized chunks of the script covered in each take that can be used in conjunction with your other shots to complete the edit.

One of the most common shots you’ll see during dialog scenes in film is the OTS, or over the shoulder. In our example, two OTS shots will be essential for the edit, but don’t film just each of their sets of lines. Just let the film roll even while the person off camera is talking. This is a huge factor in shooting for the edit because it gives the editor the opportunity to cut away to a reaction shot of the off-camera listener, giving him the opportunity to stitch two different takes of the speaker’s lines together allowing for the best edit possible. Because let’s be honest, you’re not going to get Brad Pitt and Tom Cruise to act for you, so your actors will probably need all the help they can get.

So you’ve got a master shot, and two complete OTS shots of your actors, but shooting for the edit doesn’t stop there. Ask yourself what else is important in the scene. Do the actors reference something that can be seen in the shots? Remember line of sight. Utilize all the time you have on set. Sure, you may over shoot but it’s always better to be safe than sorry.

Stephen Schweickart is the co-founder of VScreen. For more information on this topic, visit VScreen’s site at http://www.vscreen.com/.