Existing-Home Sales at Pace Not Seen Since Summer

Existing-home sales in October were at a pace not seen since summer, the National Association of REALTORS® (NAR) reports. 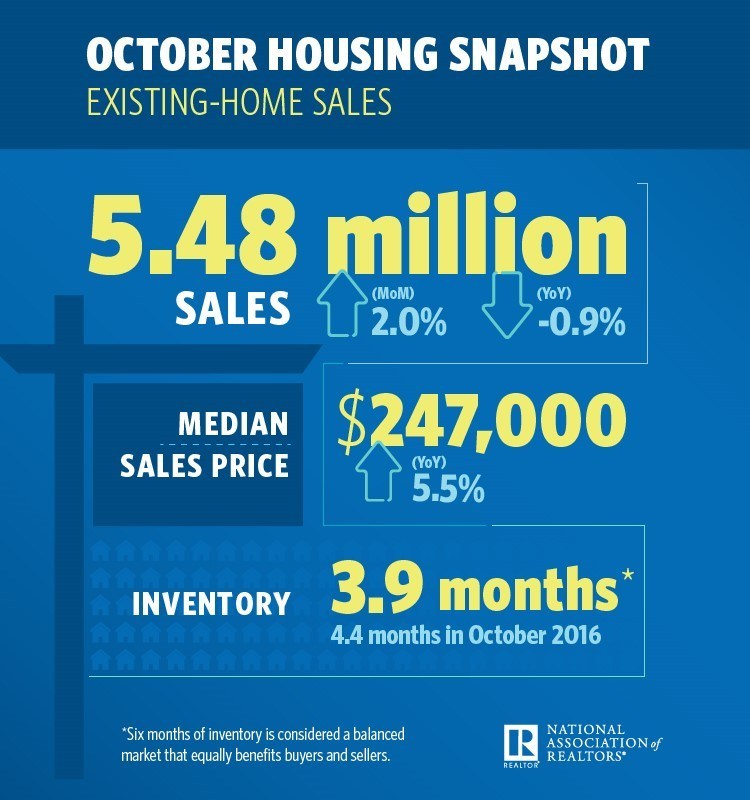 “Job growth in most of the country continues to carry on at a robust level and is starting to slowly push up wages, which is in turn giving households added assurance that now is a good time to buy a home,” says Lawrence Yun, chief economist of NAR. “While the housing market gained a little more momentum last month, sales are still below year-ago levels because low inventory is limiting choices for prospective buyers and keeping price growth elevated.”

Inventory is currently at a 3.9-month supply. Existing homes averaged 34 days on market in October, seven days less than one year prior. All told, 47 percent of homes sold in October were on the market for less than one month.

“Existing-home sales showed another pick up in momentum from September to October, but compared to a year ago, sales were lower for the second time since July 2016,” says Danielle Hale, chief economist at realtor.com®. “Inventories continue to drop from one year ago, creating challenges for buyers across the country. One reason sales were likely able to pick up in September is the increase in new listings available to home shoppers. Realtor.com data show that in spite of declines in overall listings, new listings have increased from a year ago in four of the last five months.”

“Listings—especially those in the affordable price range—continue to go under contract typically a week faster than a year ago, and even quicker in many areas where healthy job markets are driving sustained demand for buying,” Yun says. “With the seasonal decline in inventory beginning to occur in most markets, prospective buyers will likely continue to see competitive conditions through the winter.”

Twenty percent of existing-home sales in October were all-cash, with 13 percent by individual investors. Four percent were distressed.

“The residual effects on sales from Hurricanes Harvey and Irma are still seen in parts of Texas and Florida,” says Yun. “However, sales should completely bounce back to their pre-storm levels by the end of the year, as demand for buying in these areas was very strong before the storms.”

First-time homebuyers comprised 32 percent of existing-home sales in October, an increase from 29 percent in September.

According to NAR President Elizabeth Mendenhall, existing-home sales and the health of the market—and homeownership overall—is threatened by tax reform.

“Making changes to the mortgage interest deduction, eliminating or capping the deduction for state and local taxes and modifying the rules on capital gains exemptions poses serious harm to millions of homeowners and future buyers,” says Mendenhall. “With first-time buyers struggling to reach the market, Congress should not be creating disincentives to buy and sell a home. Furthermore, adding $1.5 trillion to the national debt will raise future borrowing costs for our children and grandchildren.”

Could the Mortgage Rate Surge Cool the Market Even Further?