With less than a week until their Christmas deadline, House Republicans passed the converged Tax Cuts and Jobs Act bill—set to be the first tax overhaul in over 30 years—in a 227-203 vote on Dec. 19. However, the Senate Parliamentarian required a re-vote, citing three provisions in violation of the Senate Byrd rule. The Senate voted late Tuesday night, winning along party lines in a 51-48 vote, and the House voted again on Dec. 20 after the provisions in question were amended by the Senate. After it was enrolled, the bill made its way to President Trump’s desk to be signed into law.

Create your own user feedback survey

The real estate community, especially the National Association of REALTORS® (NAR), has advocated for a tax reform bill that protects homeowners. While some of the final provisions in the Tax Cuts and Jobs Act are an overall improvement to tax policy changes that were initially proposed in the Senate and House bills, NAR does not believe they are enough to truly benefit the homeowner community.

“The final tax reform bill is far from perfect, but it’s been greatly improved for homeowners over previous versions,” said NAR President Elizabeth Mendenhall in a statement. “REALTORS® should be proud of the good work they did to help get us here. We generated over 300,000 emails to members of Congress through two calls for action and held countless in-person meetings with legislators, all of which helped shape the final product.

“The results are mixed,” Mendenhall said. “We saved the exclusion for capital gains on the sale of a home and preserved the like-kind exchange for real property. Many agents and brokers who earn income as independent contractors or from pass-through businesses will also see a significant deduction on that business income.

“Despite these successes, we still have some hard work ahead of us,” said Mendenhall. “Significant legislative initiatives often require fixes to address unintended consequences, and this bill is no exception.

“The new tax regime will fundamentally alter the benefits of homeownership by nullifying incentives for individuals and families while keeping those incentives in place for large institutional investors,” Mendenhall said. “That should concern any middle-class family looking to claim their piece of the American Dream. REALTORS®’ work to help them get there will continue, and we look forward to joining members of Congress from both sides of the rotunda on that endeavor.”

American taxpayers could see an impact on their paychecks as early as the next couple of weeks. The new bill lowers the tax brackets, which will mean less money taken out of some paychecks. Most changes, however, will become apparent when U.S. residents go to file taxes in 2019 for the 2018 tax year. The numbers will change over time, as well. The Tax Policy Center estimates that although individual taxes would be reduced, on average, in 2018, more than half of households will experience a tax increase by 2027. 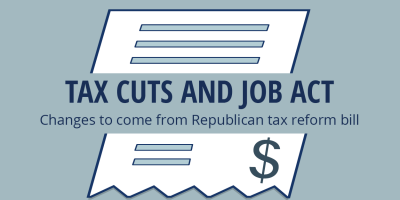 Here are some of the major changes Americans can expect from the new tax policy:

“NAHB fully supports the final conference report on tax reform legislation and commends the work of House-Senate conferees,” said Granger MacDonald, NAHB chairman. “This comprehensive overhaul of the nation’s tax code will help middle-class families, maintain the nation’s commitment to affordable housing and ensure that small businesses are treated fairly relative to large corporations. Lower tax rates and a fair tax code will spur economic growth and increase competitiveness, and that is good for housing. We urge the House and Senate to move quickly to pass this legislation.”

David H. Stevens, CMB, president and CEO of the MBA, stated, “I want to thank House and Senate leadership and the members of the conference committee for including key real estate and housing provisions in the final tax bill. Specifically, we are grateful for the amendment to Section 13221 of the original Senate-passed bill offered by Senator Mike Rounds , to create an exception for any item of gross income in connection to a mortgage servicing contract.

“Additionally, we are glad to see the bill preserves current law by allowing homeowners to exclude up to $500,000 of the gain on the sale of a home. MBA also appreciates the inclusion of the Low-Income Housing Tax Credit (LIHTC) and the tax-exempt status for private activity bonds (PABs). We also are very pleased that the bill preserves business interest deductibility for real estate, as well as Section 1031 like-kind exchanges for real property. Finally, we are glad the bill preserved the option of deductibility of up to $10,000 in property taxes.

“MBA looks forward to working with policymakers on implementation of this legislation.”

The California Association of REALTORS® (C.A.R.) issued the following statement:

“While the impact of this bill may not be as harmful in many parts of the country, here in California, where the typical home costs two-and-a-half times the national home price, homeowners and would-be buyers will be hit especially hard,” said C.A.R. President Steve White. “As we move forward and learn the true and full impact of this legislation, we hope we can work with Congress to make the necessary changes that will keep housing as the foundation of this great nation’s economy. We are disappointed that Congress has passed tax reform legislation that puts home values at risk and dramatically undercuts the incentive to own a home. For more than a century, American tax policy has recognized the value of homeownership to American middle-class wealth creation, strong and stable communities, and as a driver of our economy.  Homeownership has been and will always be the foundation of opportunity for Americans across our great nation, and C.A.R. will not stop advocating for it.”

A Supportive and Caring Culture

Build a Strong Brokerage With Your REALTOR® Store