After an historic 2020, the first month of 2021 weakened—albeit just slightly. According to Radian Home Price Index (HPI) data recently released by Red Bell Real Estate, LLC, a Radian Group Inc. company, home prices nationally rose from the end of December 2020 to the end of January 2021 at an annualized rate of 7.5%.

For the past 12 months, the Radian HPI rose 8.0% (January 2020 to January 2021), unchanged from the prior month’s annualized rate. Over the last six months of the year, home prices nationally appreciated at an annualized rate of 9.4%. This represents the fastest rate of six-month appreciation in more than a year. The Radian HPI is calculated based on the estimated values of more than 70 million unique addresses each month, covering all single-family property types and geographies. 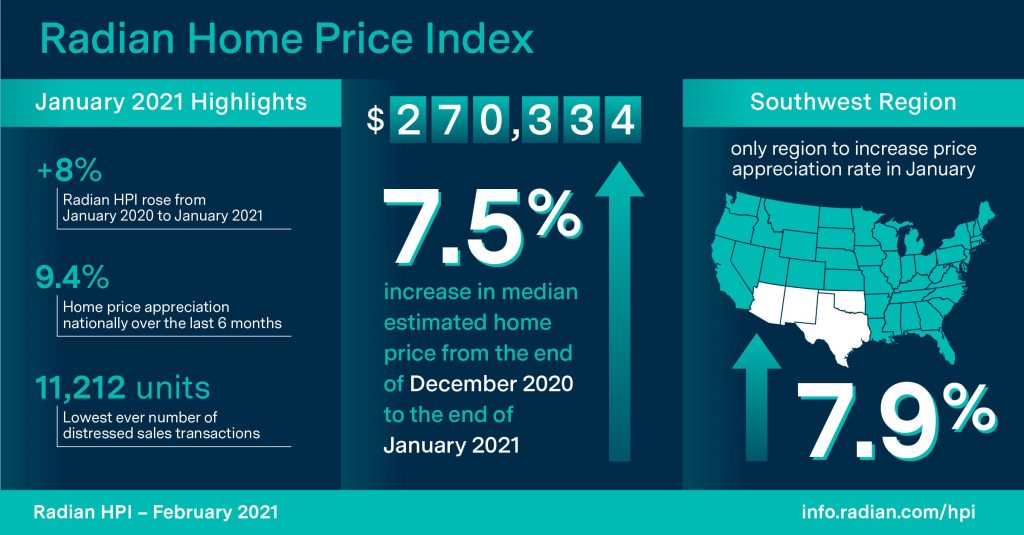 “Home prices picked up in January, about where they left off in December. Home prices across the U.S. were solidly in positive territory once again,” noted Steve Gaenzler, SVP of Data and Analytics. “With elections, inaugurations and the holidays behind us, and vaccinations and modest levels of potential normalcy visible on the horizon, it shouldn’t surprise many that homes prices continue to be a shining star,” added Gaenzler.

National Data and Trends
The national median estimated price for single-family and condominium homes rose to $270,334. From December 2020 to January 2021 the one-month appreciation, an annualized 7.5% rate, was the slowest recorded since August 2020. Historically, home prices have come under pressure during periods of economic stress as foreclosure sales and other distressed transactions add discounted properties into the inventory. During the Great Recession, monthly volume of sold properties that were considered distressed peaked at nearly 82,500 units (March 2011) and represented more than 43% of all sales that month. In contrast, January 2021 recorded the lowest ever number of distressed sales transactions, at 11,212 units. The tally represented just 4.9% of total sales for the month. This lack of distressed supply is a marked difference from prior periods of economic stress.

Regional Data and Trends
While still firmly positive, regionally, five of the six regions had softer home price appreciation in January 2021 compared to the prior month. In January, the Southwest Region (+7.9% annualized) was the only region to accelerate price appreciation from December’s strong month. However, it was the South region (+8.9% annualized) that captured the top position for price growth in January.

A closer look at state level home price appreciation rates in January shows distinct differences by state. States in the West (Idaho, Washington, Montana, Oregon) held four of the top 10 states for positive appreciation, while the South (Alabama, Louisiana) also fared well. However, these states are smaller components of the housing stock in their respective regions, diminishing their impact on the broader regional indices.

Metro Area Data and Trends
Across the 20-largest metro areas of the U.S, the start of 2021 resembles the national trend. In 18 of the 20 largest metros, January’s appreciation was the slowest since the third quarter of 2020. In most cases, August was the last time there were similar appreciation rates. This underscores the significant appreciation rates recorded in the fourth quarter as mortgage rates once again fell to all-time lows.

Hauling Houses and Buying the Block: Outside-the-Box Ideas in Housing

Intelligent Tech is the Key to Building Your Brand

Don’t Be That Person With Email Marketing