Demand in the California housing market tempered for the fourth consecutive month in August as home sales returned to pre-crisis levels, but the statewide median home price set another record high, the California Association of REALTORS® (C.A.R.) said. 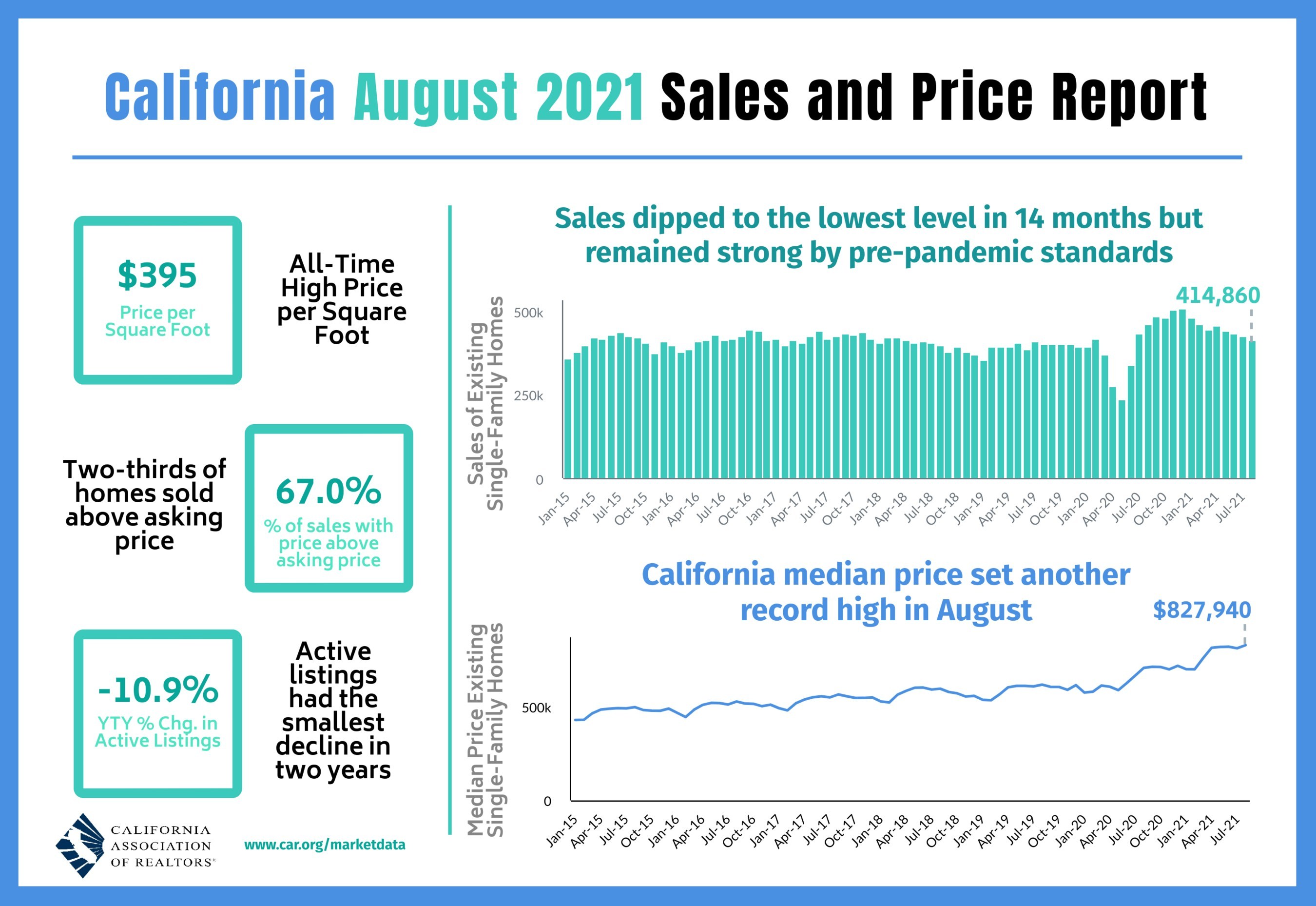 Closed escrow sales of existing, single-family detached homes in California totaled a seasonally adjusted annualized rate of 414,860 in August, according to information collected by C.A.R. from more than 90 local REALTOR® associations and MLSs statewide. The statewide annualized sales figure represents what would be the total number of homes sold during 2021 if sales maintained the August pace throughout the year. It is adjusted to account for seasonal factors that typically influence home sales.

August’s sales pace was down 3.3% on a monthly basis from 428,980 in July and down 10.9% from a year ago, when 465,400 homes were sold on an annualized basis. August’s sales level was the lowest in 14 months. Despite the monthly and annual sales drop, California home sales remained strong by pre-pandemic standards, maintaining a solid year-to-date increase of 21.3%.

“The normalizing market and modestly improving housing inventory in the past few months have created an opportunity for homebuyers who sat out the highly competitive housing market seen over much of the past year,” said C.A.R. President Dave Walsh in a statement. “With the highest level of active listings in nearly a year, interest rates expected to stay consistently low, and a dip in multiple offers, now is a good time for discouraged buyers to get back into the game.”

After taking a breather in July, California’s median home price set a new record in August at $827,940—the fifth record set in six months. The August price was 2.1% higher than the $811,170 recorded in July and 17.1% higher than the $706,900 recorded last August. The median price in California remained above the $800,000 benchmark for the fifth consecutive month.

“While home sales at the lower end of the market are underperforming due to a lack of supply and the economic uncertainty induced by the COVID resurgence, the higher-priced segments continue to see double-digit sales growth that’s keeping the overall market from moderating too fast,” said C.A.R. Vice President and Chief Economist Jordan Levine in a statement. “With interest rates expected to stay low for the rest of the year, sales in California will remain solid by pre-pandemic standards while price growth will likely ease further in the coming months.”