There are several reasons people seek out a career change. For some, it may be financial, while for others, it may be to pursue a dream at long last. For Paula Camarena, changing careers was about independence and finding a profession that she not only loved, but also made a difference in people’s lives.

Camarena is a franchisee for Pillar To Post Home Inspectors® in Huntington, California. But before taking on this entrepreneurial role, Camarena, who also has an MBA, built a successful 20-year career in sales at some of the largest tech companies in the nation, including Cisco and Verizon.

Despite her success, she felt ready to make a change. Having always dreamed of owning her own business, it wasn’t until she sold some properties that she figured out what direction she’d want to take as an entrepreneur.

“I liked real estate,” Camarena says, “so at first, I thought about becoming an agent and had conversations with some of my girlfriends in the business. That helped me realize that I wanted to do something more unique within real estate.”

As Camarena began to weigh her options, she realized what she didn’t want out of her next career. This realization helped galvanize her decision to pursue home inspection as a profession.

“I wanted to stop sitting behind a desk all day,” recalls Camarena. “I wanted to be more mobile and be around people.” 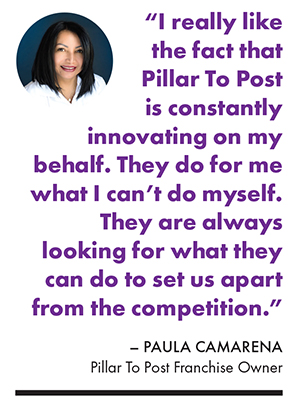 This revelation led Camarena to investigate home inspection, and it didn’t take long for her to realize that was indeed her calling. But she didn’t jump in head first. Being the savvy professional she is, she was pragmatic in this career transition.

“I knew I could do this, but I had questions about whether it was a good career path that could fulfill my goals and was also lucrative,” says Camarena, who implies that the answer to those questions was, and still is, a resounding yes.

She does admit, however, that it wasn’t necessarily the direction she ever expected to head toward professionally. “This is a trade that not many, or really anyone, says they want to do when they grow up. But it’s needed, and it’s important,” notes Camarena.

Nevertheless, when Camarena set her sights on pursuing a career in home inspection, Pillar To Post was the company she approached for more information. With a nationwide footprint of highly qualified inspectors, and best-in-class technology, Camarena quickly realized this was an organization she wanted to be a part of when launching her own business. Roughly five months later, she became a certified inspector and hung her own shingle with the strength and resources of Pillar To Post behind her.

“I really like the fact that Pillar To Post is constantly innovating on my behalf,” she says. “They do for me what I can’t do myself. They are always looking for what they can do to set us apart from the competition.”

That innovation, coupled with Camarena’s passion, has made her an unstoppable force. Not only for the quality of her service, but for her professionalism and dedication to the trade.

“Paula is representative of the top-quality home inspectors in our network. Precise, savvy and desirous of new technology and the latest, most helpful innovations for homeowners and REALTORS®,” says Melissa Schmitt, a regional director at Pillar To Post in Camarena’s territory.

If that doesn’t say enough about Camarena, the testimonials on her website should convince you. Not only is her service rated 4.9 out of five stars on Pillar To Post’s site, but her clients take the time and effort to thoughtfully review her work.

If you were to craft a word cloud of frequently used descriptors from her client reviews, you would see: thorough, helpful, honest, friendly, respectful, punctual, detail-oriented and caring. 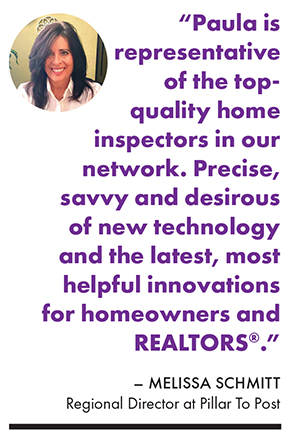 For example, “Paula was great and very helpful and honest. She was very thorough and shared all videos and images with us so that we had a clear understanding…of what would be suggested to be repaired. I even called her after her inspection and she was very willing to give me clarity on a couple of issues,” said Shane C. in a five-star review.

“I would definitely use Paula Camarena again. She was eager to help on short notice. She traveled quite a distance and was there early. She was very thorough and explained issues to us when she finished. We had our report in less than 24 hours, and she followed up with us. She was professional and made sure she answered all our questions. I have had many inspections before, and Paula was excellent,” said Diane R. in another five-star review.

This feedback is indicative of the kind of business Camarena wants to run. For her, it’s personal. She cares, and she wants people to recognize that.

“First-time homebuyers are scared. They need somebody to say, ‘It’s okay. I’m here to help you understand,'” says Camarena. “You have to be able to speak to people. You don’t want to scare them off or be rude or negative. Anything can be fixed. Nothing in inspection is a do-or-die situation. The delivery of a message about deficiencies in a home is very important, and you need to do that appropriately.”

Such a thoughtful and thorough approach isn’t hindering her business growth, however. Camarena inspects more than 200 homes each year. A typical week for her is two inspections a day, with possibly a few more on the weekends. She even admits that during the summer months, when there’s more daylight, she might try to get a third inspection done on a given day—but only if she’s confident that she can give that home the same laser-focused attention she gives every property.

This ambition, of course, is leading to what you might say is a good problem to have. There’s only one Paula Camarena, but her demand is growing, so to scale her business, she has started to work with another inspector so that she can take on more projects. This includes larger properties, with homes as substantial as 12,500 square feet.

While homes of that caliber are not her bread-and-butter business at the moment, Camarena says they are becoming more common, even as regular as once a month. This means she is looking toward onboarding full-time talent for her business down the road to “grow it as big as I can possibly grow it.” 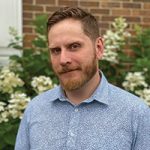 Window to the Law: How a .realtor Web Address Can Set You Apart