A Synergistic Approach to Driving Growth and Excellence

Above From L to R: David Romero, Dan Kruse and Jasen Schrock 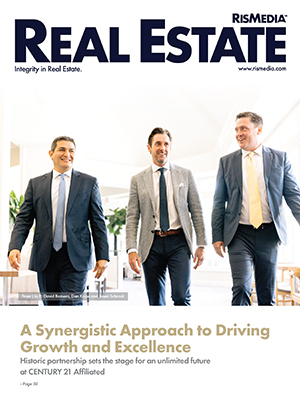 No one is more bullish going into 2023 than the energized executive team at CENTURY 21 Affiliated. The award-winning brokerage, ranked the No. 1 CENTURY 21 franchise in the world for the last eight years running, is breaking new records across four Midwestern states with $100 million in adjusted gross commissions and more than 21,000 closed transactions last year—and is expanding into Southern California with undisguised plans to win the West.

“Our recent merger in Southern California with CENTURY 21 Award marks the first time that two of the top five CENTURY 21 brands have come together,” says Dan Kruse, CEO and owner of CENTURY 21 Affiliated, the world’s largest CENTURY 21 franchise. “In an evolving industry and an ever-changing market environment, this historic partnership gives us new resources, new scalability and new opportunity to drive increased benefits for a greater number of agents and customers.”

The company is no stranger to the value of partnerships as a hedge against changing markets. The initial CENTURY 21 A-K Realty franchise, founded in Madison, Wisconsin, by Bill Kessler, who sold his van to help finance the deal in 1978, became CENTURY 21 Affiliated when it merged with three Wisconsin CENTURY 21 offices after the market crash of the early ’80s. Before and since the 2008 downturn, the company joined forces with brokerages in Illinois, Michigan and Minnesota before announcing its entry into California.

“We’ve always felt that uncertain markets provide the best time to grow and expand,” says Kruse, who joined the company in 2000 and became CEO in 2015. “We grew 300% during the last downturn while others were pulling in their horns—and thanks in great measure to company President and Partner Jasen Schrock, who focused on internal mergers and acquisitions in his earlier career at CENTURY 21 corporate, we’ve been able to make strategic partnerships, like this one with CENTURY 21 Award, a major component of our growth strategy.” 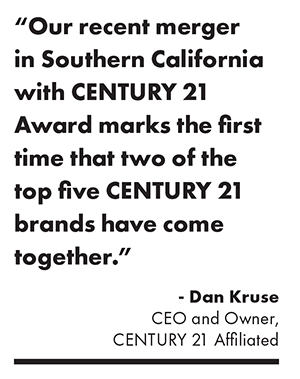 Barbara Pronin: It seems the three of you—Dan, Jasen and David—share very similar visions. Is growth at the top of your agenda?
Dan Kruse: Strategic growth, absolutely. We remain No. 1 in the franchise worldwide because we’ve set the standard for customer care and because we are committed to providing our agents with the resources they need to keep that edge. This timely expansion in the midst of a changing market strengthens and underlines that commitment.

BP: Why the West Coast?
DK: We see huge potential for growth in California and on the West Coast in general. There have been some shake-ups there of late that we see as an opportunity for us to gain a significant foothold in what is typically a strong and growing market.
Jasen Schrock: Expanding our geographic footprint helps us to grow quickly rather than one agent at a time, and it’s especially advantageous when you partner with another strong company that shares your values and commitment. We are confident that this merger will create synergies that will drive not just growth, but excellence.
David Romero: Like Dan and his team, we’ve built a winning brokerage based on the caliber of our agents and a forward-thinking philosophy that has enabled us to attract the best of them. This merger is more than a meeting of the minds. It’s a chance to use our combined strengths to create a more enabled agent pool.

BP: How much, if at all, did the pandemic years have to do with your decision to expand?
DK: No one could have predicted that the past couple of years would become such a boom time any more than we know today what may happen two years from now. But we do know from experience that every market cycle brings opportunity. On the one hand, we strengthened our core by recruiting and training more agents. At the same time, we never lost sight of the opportunity to grow—as we did, for example, into the resort and second-home market of St. Joseph on the Lake Michigan shore, which began with pandemic-driven activity and continues to be a strong market.
DR: The three of us have been discussing the pandemic era of late, specifically how so many of our agents had never seen such truly dramatic market shifts. In a way, it was a teachable moment—a chance to coach our agents on how to be effective in different market scenarios. In most any market, the best trained and most dedicated agents will do the lion’s share of business, but the digital and video skills that our agents developed during this unusual time will be a great asset going forward.
JS: The one thing the pandemic didn’t change was our commitment to listen to our agents. In fact, we recently got together with the Top 50 agents and tossed around some softball questions: What are you seeing out there? What are you doing differently? What do you need to help you do a better job? We could feel their excitement and their collaborative spirit. It was affirmation that they share the same culture of mentoring and support that’s been a hallmark for us here at Affiliated.
DK: It was inspiring, too, as we move onto a larger playing field, because the sharing of intel is as important, maybe more important, than sharing tools and technologies.

BP: The merger brings 15 Southern California offices onto that larger playing field. What do you see as your biggest opportunity?
JS: Spearheading growth. Having gone through a full market cycle now with CENTURY 21 Affiliated, I know that time catches up with all of us—that sure and steady growth comes not just from doing what you do best, but by identifying new markets where doing what you do best offers the most opportunity. This merger, with David continuing to oversee the merger for his capable and experienced California agents, is a strategic next step in our plan to build a dynamic presence in the West.
DK: Especially now, as the market changes, the idea is not to be opportunistic, but to take advantage of the ability to combine forces in ways that offer more support to our agents, provide more in value to our customers and help the company become more effective and competitive locally, across the nation and globally.

BP: What do you see as your greatest challenge?
DK: The things that are beyond our control. No one knows what’s coming down the pike, whether it be a soft landing in this economy or something more dramatic. The fact is, we know what we know, but we don’t know what we don’t know. We will need to time things properly, take one step at a time and make the right moves based on what we see.
DR: Also, we are 18 states away from each other, and while Zoom is great, it can’t replace the face-to-face. We’ll have to be innovative in finding ways to connect our people on a regular basis—company-wide events for agents, for example—because while our company cultures are very much in sync, we don’t want to lose the chance to celebrate achievements, enjoy the camaraderie and build pride in our unified efforts.

BP: What’s likely to change as a result of the cross-country partnership?
JS: Not much in the day-to-day. Education and agent outreach are critical, so we’ve merged our technologies and launched an online learning system our agents can sign onto no matter where they live. But we know the value of a high-touch component, and that’s why we’re developing plans that will allow long-distance agents to share ideas and motivations, as well as what’s working (and not working) for them.
DR: Zooming in pajama bottoms might have seemed cool, but people developed some bad habits during all that time away from the office. But now there’s a push to come back in, and agents are realizing all that they’ve missed: the friendships and the supportive face-to-face that was so much a part of their success. They’re showing up again in greater numbers and telling their friends what they’ve been missing.
DK: There’s been a hunger to come back to the office. It creates that sense of being part of a greater good that’s been missing since the pandemic sent them home. Now the goal is to span the miles so we can all share the same excitement in order to foster an appreciation of the whole team and take pride in what we do as a company.
JS: Every agent is an entrepreneur. They tend to listen to their entrepreneur voice, always looking for that next great idea. Our job is to hear those great ideas company-wide, breathe life into them and make them happen.

DK: We have all pledged to drive more benefit to our agents; more success-building tools and more leads activity. These are things that will be easier to accomplish across the board as we continue to merge ideas and resources.
DR: At the same time, we are fully immersed in our local communities, and that will not change. We built our reputations in trusted local offices, and in today’s uncertain times, more buyers and sellers want to do business with an established brand they know they can rely on.

BP: Talking to the three of you, we can sense the synergy. How do you work so well together?
DR: We stem from the same roots, for one thing. My Mom was a CENTURY 21 agent when I was in high school, so the brand has been part of my life for decades.
DK: And both my parents were CENTURY 21 agents, so the brand is in my DNA as well. It was through my parents that I met Bill Kessler, and of course, the rest is history.
JS: As for me, I started at CENTURY 21 corporate right after graduation. It’s the career home I know and love.
DK: Funny thing is, having parents so deeply involved in this business, both David and I swore at one time or another that we’d never follow in their footsteps. But here we are, deeply involved for more than half a century between us, still embracing it, still looking for new ways to do it better.

BP: Apart from the chance to work together, what do you see as the best thing about this expansion into Southern California?
DR: Strength. Better tools, better systems, better software to keep our agents on the cutting edge—and more buying power to ensure we can continue to do that.
JS: Value. Together, we can bring more value to more buyers and sellers in more diverse markets.
DK: And, I think, solidarity. Confidence in our continued growth and the vision to see it through. CENTURY 21 Affiliated’s expansion into Southern California will set the stage for an unlimited future. It was the right thing to do for both our companies, for the CENTURY 21 brand, and for our agents and clients we service. 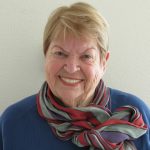