Political analysts Karl Rove and April Ryan touched on the recent midterm election, shared personal stories from their time in the White House, and discussed the role of REALTORS® in politics during the Federal Legislative and Political Forum at the 2022 NAR NXT, The REALTOR® Experience.

On the midterm’s election results

Ryan began by saying politics is going to extremes because we are hurting. “This nation is looking for a silver bullet because we are in a time that is so tough, that we’ve never seen before.” 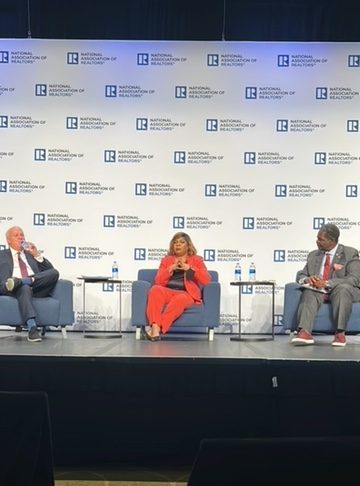 On serving in the White House

Both Rove and Ryan fascinated the audience with stories and insights about their years and vast experiences in the White House.

“I have seen war and peace, and everything in between, come to the highest office in the land,” Ryan said. “It is such a blessing and an honor.”

During the second Bush administration, Ryan said, “I remember chasing Karl Rove through the West Wing.” Rove joked, “I would run from you,” to rapturous laughs from the crowd.

Ryan spoke of being especially moved during her time covering President Bill Clinton. “Clinton was the president who saw the highest level of Black homeownership in this country.” She sadly noted the Black homeownership rate is now no better than it was when the Fair Housing Act was passed in 1968.

Ryan also recalled all the work former President George W. Bush did for Africa. “One thing about George W. Bush is he has a great heart, and that isn’t always seen. George Bush has done more for Africa than any other president.”

“No other country on the face of the planet could do it,” Rove said.

Rove and Ryan also reflected on other poignant moments, including the gracious transition of power between former presidents George W. Bush and Barack Obama, breaking the news of the September 11 attacks, and Vladimir Putin’s awestruck reaction to entering the Oval Office.

On the role of REALTORS® in the political process

Rove and Ryan concluded with thoughts on why REALTORS® must stay politically engaged.

Rove went on to praise RPAC, calling it “enormously successful.” He also commended REALTORS® for their focus on supporting quality candidates. “It matters that you elect people who understand the importance of the issues you stand for. You’re electing advocates … who will not only represent you but represent your communities with integrity and character.”