Does a Wine’s Price Tag Affect Its Taste?

RISMEDIA, Jan. 19, 2008-The old adage that you get what you pay for really is true when it comes to that most ephemeral of products: bottled wine. According to researchers at the Stanford Graduate School of Business and the California Institute of Technology, if a person is told he or she is tasting two different wines – and that one costs $5 and the other $45 when they are, in fact, the same wine – the part of the brain that experiences pleasure will become more active when the drinker thinks he or she is enjoying the more expensive vintage.

“What we document is that price is not just about inferences of quality, but it can actually affect real quality,” said Baba Shiv, associate professor of marketing who co-authored a paper titled “Marketing Actions Can Modulate Neural Representations of Experienced Pleasantness,” published online Jan. 14 in the Proceedings of the National Academy of Sciences. “So, in essence, is changing people’s experiences with a product and, therefore, the outcomes from consuming this product.” 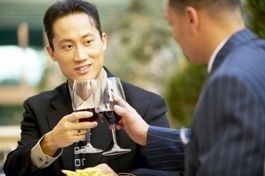 Although researchers have used fMRI scans in recent years to gauge brain activity, the study is one of the first to test subjects as they swallow liquid – in this case, wine – through a pump attached to their mouths, a tricky complication because the scanner requires people to lie very still as it measures blood flow in the brain.

According to Shiv, a basic assumption in economics is that a person’s “experienced pleasantness” (EP) from consuming a product depends only on its intrinsic properties and the individual’s thirst. However, marketers try to influence this experience by changing a drink’s external properties, such as its price. “This type of influence is valuable for companies, because EP serves as a learning signal that is used by the brain to guide future choices,” the paper says. Contrary to this basic assumption, several studies have shown that marketing can influence how people value goods. For example, Shiv has shown that people who paid a higher price for an energy drink, such as Red Bull, were able to solve more brain teasers than those who paid a discounted price for the same product.

“We hypothesized that changes in the price of a product can influence neural computations associated with EP.” Because perceptions about quality are positively correlated with price, the scholars argued that someone might expect an expensive wine to taste better than a cheaper one. Their hypothesis went further, stipulating that a person’s anticipated experience would prompt higher activity in the part of the brain that experiences pleasure, the medial orbitofrontal cortex, or mOFC, in the forehead.

Shiv, a native of India, said he decided to study wine because so many people, especially in the Golden State, are crazy about it. “I’m just fascinated with wine,” he said. “It has always amused me how much time and effort people put into this hobby. I couldn’t understand it until I moved to California and started appreciating the whole thing. But, in the back of my mind, the price variation in wines has always puzzled me. You can go from spending $4 to $200 to $300 and up a bottle. Why are people going for that? Some are trying to show off, but most people are not. They are very serious about it, and they think that the more expensive it is, the better it is. That has always befuddled me. Is it really that people are getting more pleasure from it? Or do they just think so?”

The researchers recruited 11 male Caltech graduate students who said they liked and occasionally drank red wine. The subjects were told that they would be trying five different Cabernet Sauvignons, identified by price, to study the effect of sampling time on flavor. In fact, only three wines were used – two were given twice. The first wine was identified by its real bottle price of $5 and by a fake $45 price tag. The second wine was marked with its actual $90 price and by a fictitious $10 tag. The third wine, which was used to distract the participants, was marked with its correct $35 price. A tasteless water was also given in between wine samples to rinse the subjects’ mouths. The wines were given in random order, and the students were asked to focus on flavor and how much they enjoyed each sample.

The participants said they could taste five different wines, even though there were only three, and added that the wines identified as more expensive tasted better. The researchers found that an increase in the perceived price of a wine did lead to increased activity in the mOFC because of an associated increase in taste expectation.

Shiv said he expects enophiles will challenge the results, since his subjects were not professional connoisseurs. “Will these findings replicate among experts?” he asked. “We don’t know, but my speculation is that, yes, they will. I expect that the enophiles will show more of these effects, because they really care about it.”

According to Shiv, the emotional and hedonic areas of the brain could be fundamental to making good decisions because they serve as a navigational device. “The brain is super-efficient,” he said. “There seems to be this perfect overlap in one part of the brain between what happens in real time and what happens when people anticipate something. It’s almost acting as a GPS system. This seems to be the navigational device that helps us learn what is the right thing to do the next time around.”

This research was supported with grants from the National Science Foundation and the Gordon and Betty Moore Foundation.

What to Know About Working With a REALTOR®

Pros and Cons of an FHA 203k Loan: What You Should Know

Mortgage Rates Exceed 6% for the First Time Since 2008