Are Lower Mortgage Rates Working? For Some, Yes; for Others, No 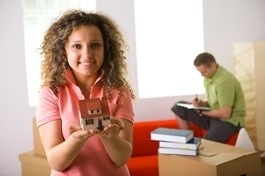 RISMEDIA, February 17, 2009-(MCT)-Low mortgage rates could be a big help to first-time home buyer Nicole Landstrom, who expects to close a sale on a three-bedroom starter in Vancouver this month.

With 30-year mortgage interest rates hovering at 5% since mid December, she just couldn’t wait any longer to buy, said Landstrom, 25, who spent months looking for her first house. She has watched home prices decline and interest rates drop significantly since beginning her search.

“I’m hoping to get a 4.75 (percent) or 5 (percent) rate, but it’s not locked in yet. Each point would increase my monthly payment by $50,” said Landstrom, a floor manager for Costco.

However, while the low mortgage rates seem to be helping new home buyers such as Landstrom, many of those who want to refinance and take advantage of the lower-rate mortgages are being turned down, especially if they purchased at the height of the housing market run-up. For these home owners, appraisals for their new loans often show home values that have dropped from the original selling price.

“We hear of more situations where the appraised value is less than the customer may owe on their mortgage,” Grenz said.

Slow home sales and declining prices are the root of the problem in Clark County, where the total number of home sales in 2008 dropped to 5,133 in 2008, down from 7,613 in 2007 and about half as many as the 10,137 homes sold here in 2006, according to “benchmarks,” which publishes data for Vancouver-based appraisal firm Riley & Marks.

Last year’s sales were the lowest in the past 15 years.

Some desperate home sellers continue to lower their asking prices, while the number of short sales-in which the home owner works a deal with the mortgage lender to permit a sale for less than the amount owed-and foreclosures are continuing to push home values down, said Dick Riley, Riley & Marks co-owner.

According to last week’s RealtyTrac report, one in 400 homes in Clark County is in foreclosure.

If the homeowner bought the house within the past three years, “The value of the home is now less than they purchased it for,” Riley said.

Thus, the homeowner may well have little or no equity, and can’t refinance without enough equity or cash to make up the difference, said Angelique Harris, a Vancouver mortgage loan officer who works for Vancouver-based Cascade Mortgage & Financial Co. of Washington.

“It’s all pretty much part of the declining market,” she said.

Riley said values have not yet bottomed out for Clark County’s high-end homes, which were once priced in the half-million-dollar to $1 million range.

“Newer neighborhoods with higher values still have a long way to go,” Riley said.
That can be hard for some homeowners to believe.

“They think it should be worth the same price they paid for it at the peak of the market,” Riley said, “Especially if they used 100% financing.”

No longer available, the risky mortgages were popular during the countywide home-selling boom, between 2004 and August of 2007. It can be a real problem for borrowers who want to refinance now, said Don Lamb, a loan officer with Sierra Pacific Mortgage in Vancouver.

“They’re feeling left out because they can’t get the low interest rate,” said Lamb, who has had to tell a potential client that refinancing wasn’t an option. The customer was a friend who had purchased his home for $250,000 in 2006.

Lamb advises his clients to remain in the home and take advantage of the high interest rate as an income tax write off.

“Hopefully, your investment will pencil out or make you a profit one day. Right now it won’t, because it’s a declining market, but you might as well be happy with your environment,” he said.

The relaxed lending guidelines of the last housing boom also gave rise to subprime mortgages, or loans that did not meet high underwriting standards.

“The parameters of the old loans do not exist anymore,” Grenz said.

Today’s home mortgage products require stated income and assets and a credit score of 740 or above, Grenz said.

“The simplest thing to do is to have your income and asset statements available,” he said.

Most mortgage brokers say they encourage first-time buyers and refinance applicants to apply for approval.

“We analyze each refinance based on its merit,” said Ed Barbier, mortgage branch manager of Home Street Bank in Vancouver.

He urges first-time home buyers to apply for pre-approval before they start the search for a new home.

“That gets the biggest obstacle out of the way,” Barbier said.

Sitting on the fence

Bruce said rates, which inched up by 0.25% last week, likely won’t drop much lower, he said, adding that the federal government does not set mortgage rates which are a function of the market and not government controls.

“When Congress talks about doing something to lower the interest rate, that’s not for mortgages,” Bruce said, predicting that rates would continue to hover near 5%. “But you still get a lot of people sitting and waiting.” In the meantime, a lot of people are missing the boat, Bruce said.

“You have a lot of people sitting and waiting for the rates to come down,” he said. “The challenge is, the government doesn’t set (mortgage) rates.”