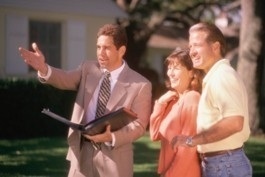 RISMEDIA, December 20, 2010—(MCT)—Last spring, in the waning days of the first-time home buyer tax credit, Stephen Ploski made an offer on a foreclosed home in Farmington Hills, Mich.  He said the 1,400-square-foot home was livable, but needed serious updates. He was willing to do the work, and take the risk.  In exchange, he got a deal. The three-bedroom, one-bathroom home was his for $49,000. He lives in the home with his wife, Ashley and their daughter Lana.

“I wanted to buy a home because the market conditions were right,” said Ploski. “This is my first home for my family. But if you do it with an investor’s mind instead of getting emotionally attached, you can get money out of it.”

Despite strong interest in buying foreclosures, supply is expected to continue to outstrip demand in the coming year.

In a survey released last week, conducted by Harris Interactive, on behalf of Trulia and RealtyTrac, nearly half, or 49% of U.S. adults admitted they were at least somewhat likely to consider buying a foreclosed property. That’s up from 45% in May.

Ploski, a builder and remodeler, said the house had a bit of mildew, but mostly needed updates. He put in a new furnace and hot water heater, ran new wiring and installed some new drywall and insulation. He also removed two walls in the dining room to create an open floor plan with the kitchen and living room.

The improvements cost $4,000 because he did the work himself. But he figures he added roughly $11,000 to the value of the home. And when the $8,000 tax credit comes through, he’ll use that to update the kitchen. “We will sit on this one for three to five years because that’s how long you have to stay with the home buyer tax credit,” he said. “We’ll find another diamond in the rough and do the same thing.”

Carol Wagner, a REALTOR® with Real Estate One in Commerce Township, Mich., said that one of the biggest drawbacks in a buying a foreclosure is that it comes without seller’s disclosures. “So some people don’t want to buy them because they don’t know what’s involved,” she said. “Most people looking at foreclosures now are investors.”

Kevin Suksi, a financial services industry recruiter by day and real estate investor by night who lives in Dearborn, Mich., said that investors rarely buy the move-in ready foreclosures. Those largely go to owner-occupants who are willing to offer more money.

Instead, investors look for houses with bruises they can fix and sell or rent for income. “Everyone wants a deal right now, but what will they deal with?” Suksi said. “I think people will deal with paint and carpet and things like that, but when it comes to major structural problems they steer clear.”