Women Consider Family, Career and Owning a Home to be Vital Components of the American Dream

A Home Buyer Poll released by TD Bank has revealed that 64 percent of women believe homeownership is essential in defining the American Dream. In comparison, only 52 percent of men felt owning a home was important. Furthermore, aspirations of homeownership are more prominent with women, with 66 percent of current female renters stating they intend to own a home in the future as opposed to 57 percent of men. 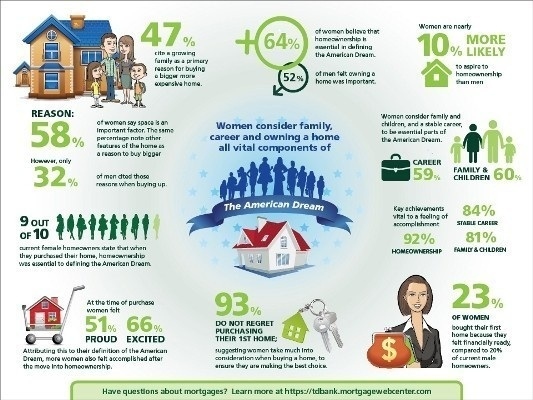 TD Bank surveyed more than 1,300 consumers across the U.S. to better understand the perceptions and attitudes surrounding home ownership and the American Dream, examining the attitudes of current renters and prospective home owners, as well as past and present home owners.

In pursuit of the American Dream, the survey also found women aren’t willing to give up on success in other areas of their lives. According to findings in the poll, women consider family and children (60 percent) and a stable career (59 percent) to be essential parts of the American Dream.

“As the home buying market continues to stabilize our survey tells us that Americans, and women in particular, are looking to buy homes,” says Michael Copley, Executive Vice President, Retail Lending, TD Bank. “At TD Bank, we believe buying a home is a significant milestone in anyone’s life. As women manage career, family and home, TD Bank is committed to helping our customers achieve their American Dream through homeownership with legendary service and array of mortgage products that can meet the needs of a first time homebuyer with limited cash or an experienced homeowner.”

Not surprisingly, elements women deem most essential in defining the American Dream (homeownership, a stable career and having a family/children) tracked similarly as what they consider important to their sense of accomplishment. Notably, homeownership leads as the primary achievement contributing to feeling accomplished:

• Having a family/children (81 percent)

Of respondents who intend to sell their current home and buy a bigger, more expensive home, 47 percent cited a growing family as a primary reason for the move.

For those who intend to sell their current house and purchase a larger one, just as many women say that space is an important factor as those who note the features of the home (58 percent). However, only 32 percent of men cited those reasons when buying up.

“To finance a bigger home purchase, customers may want to look into a jumbo mortgage, which in most housing markets is a loan of more than $417,000,” says Copley. “Though this process can be more rigorous, some banks, like TD Bank, treat jumbo mortgages as they treat other mortgage products, guaranteeing a decision on the loan in less than 24 hours. Furthermore, as a lender who does not sell our loan portfolio, TD Bank can offer flexible terms and lending guidelines, to best fit unique borrowing needs for each customer.”

Other Key Findings From The Survey Include:

• Half of current female homeowners reported buying their first home between the ages of 25-34.

• Twenty percent of women cited the American Dream as their biggest motivation in buying a home, compared to only 15 percent of men.

• At the time of purchasing their first home, women felt proud (51 percent) and excited (66 percent).