A 3D illustration of "Home For Sale" sign in front of new house.

Existing-home sales came up short in January, at their lowest in more than three years, the National Association of REALTORS® (NAR) reports. Sales decreased 3.2 percent to 5.38 million, a 4.8 percent decrease from one year prior.

Inventory, however, increased 4.1 percent to 1.52 million—but remains 9.5 percent lower than one year prior. 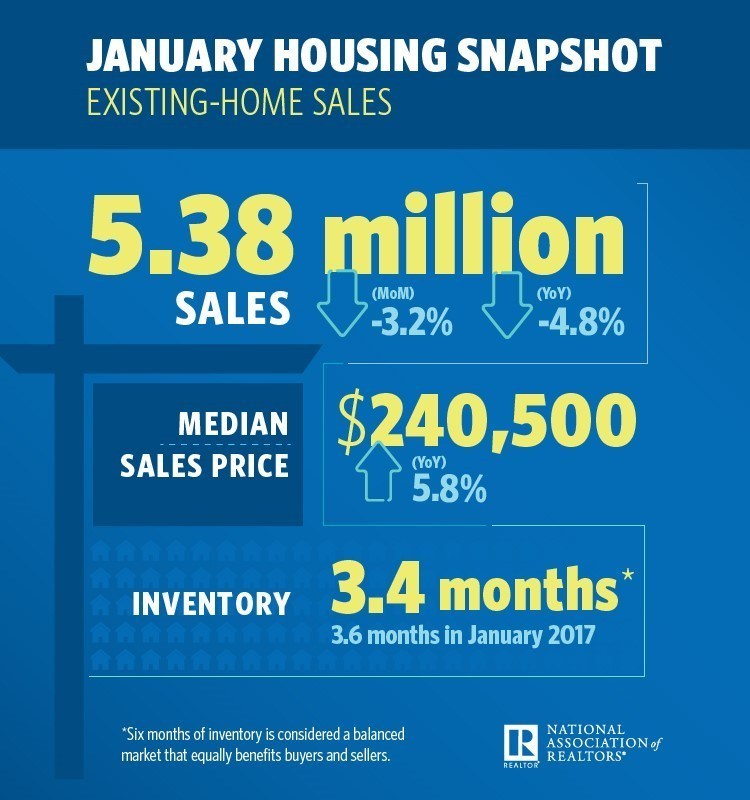 “The utter lack of sufficient housing supply and its influence on higher home prices muted overall sales activity in much of the U.S. last month,” says Lawrence Yun, chief economist at NAR. “While the good news is that REALTORS® in most areas are saying buyer traffic is even stronger than the beginning of last year , sales failed to follow course and far lagged last January’s pace. It’s very clear that too many markets right now are becoming less affordable and desperately need more new listings to calm the speedy price growth.”

Inventory is currently at a 3.4-month supply. Existing homes averaged 42 days on market in January, eight days less than one year prior. All told, 43 percent of homes sold were on the market for less than one month.

“Another month of solid price gains underlines this ongoing trend of strong demand and weak supply,” Yun says. “The underproduction of single-family homes over the last decade has played a predominant role in the current inventory crisis that is weighing on affordability; however, there’s hope that the tide is finally turning. There was a nice jump in new-home construction in January and home builder confidence is high. These two factors will hopefully lay the foundation for the building industry to meaningfully ramp up production as this year progresses.”

Twenty-two percent of existing-home sales in January were all-cash, with 17 percent by individual investors. Five percent were distressed.

“Sales have been consistent with our forecast for the beginning of the year, on par with the level seen in 2017, and potentially slightly lower as inventory levels remain restrictive and mortgage rates increase,” says Ruben Gonzalez, economist for Keller Williams. “Strong demand generated by several years of economic growth continues to drive prices higher, and if inventory remains sluggish to come onto the market, we could see price growth accelerate.”

First-time homebuyers comprised 29 percent of existing-home sales in January, down from 32 percent in December.

January’s lukewarm numbers are not the whole story, according to NAR President Elizabeth Mendenhall. REALTORS® are already experiencing interest for the spring.

“Those planning to buy a home this spring should look into getting pre-approved for a mortgage now and start having those serious conversations with their real estate agent on what they’re looking for in a home and where they want to buy,” says Mendenhall. “With demand exceeding supply in most areas, competition will only heat up in the months ahead. Beginning the home search now could lead to a successful and less stressful buying experience.”