A tumultuous summer so far in real estate has left brokers shaken, with signs of a broad housing pullback—including big hits to home sales, building permits and new construction starts—causing concern. Meanwhile, price drops and homes spending more time on the market have some worried about waning demand.

But the latest edition of RISMedia’s Broker Confidence Index (BCI) is showing that real estate professionals may be seeing light at the end of the tunnel as broker optimism ticked up for the first time this year.

Rising to 6.8 in July, up from 6.7 the previous month, the BCI—which polls 3,000 top brokers across the county—is still down 1.2 points from its launch last December, when the real estate industry was only just beginning to comprehend the threats of rising inflation, housing affordability and mortgage rate hikes.

The result provides at least some evidence that at least right now, thought leaders in the industry are not experiencing anything like a crash, as mortgage rates remain flat and much-needed inventory comes onto the market. While the ongoing shift is certainly accompanied by plenty of pain and new challenges, a significant number of brokers are confident in the course they are charting for themselves and their agents.

Those brokers who expressed confidence in the market still did so cautiously, mostly highlighting how demand has continued to drive home sales in many regions—something economists have said could soften the regional impact of a downturn.

John O’Reilly, broker at Better Homes & Gardens Base Camp in Virginia, noted that consumers certainly feel very different about the market today than they did last summer.

“The market conditions are taking their toll on buyer confidence, although we still have residual demand from current buyers. I believe new buyers will move with extreme caution before committing,” he said.

Bill McCollough, CEO of McGraw REALTORS® in Tulsa, Oklahoma, claimed that “irresponsible” reporting by national media outlets has affected local markets, many of which are still thriving with brisk home sales.

One of the biggest unknowns going forward is how successful the Federal Reserve will be in efforts to tame inflation, balancing broader economic conditions with their stated goal of bringing ballooning price growth down to more reasonable levels. Raising rates at a historic pace initially pushed mortgage rates to almost double from the beginning of the year, though they have since fallen somewhat. 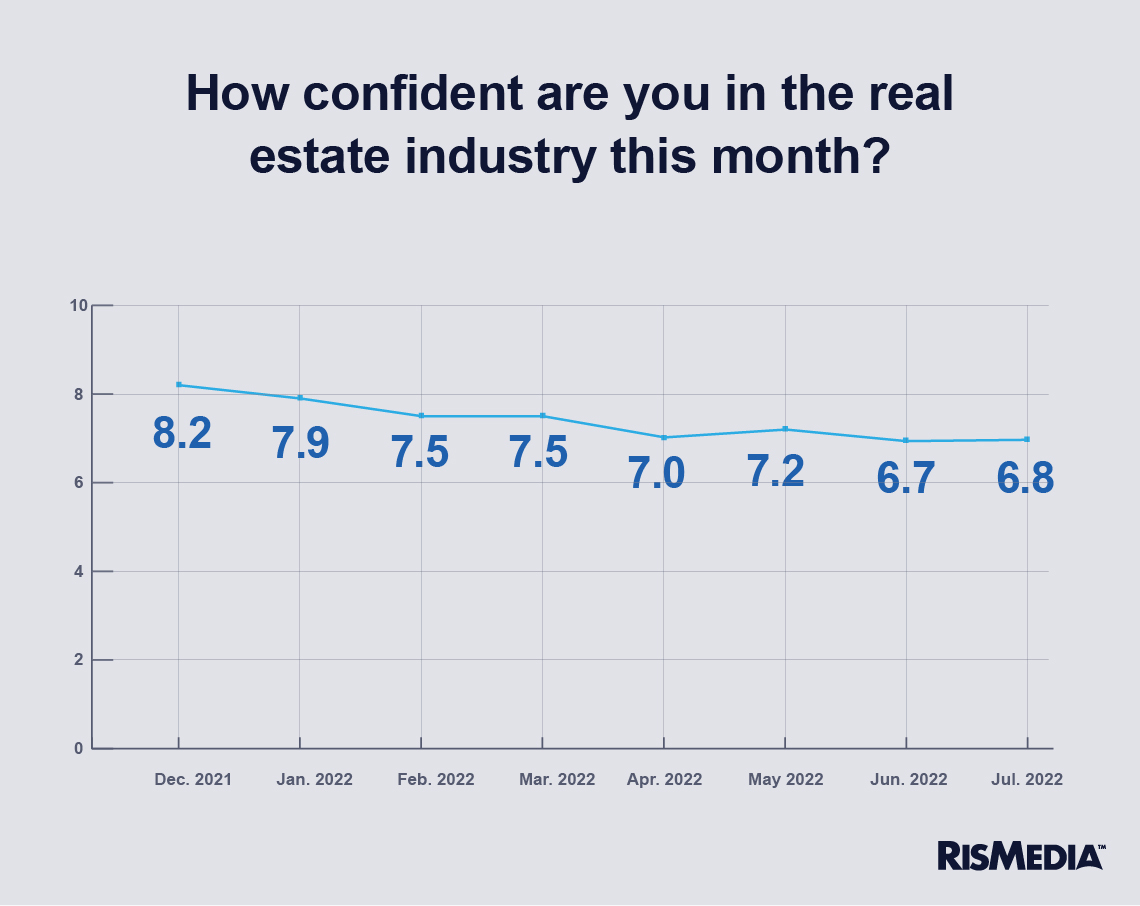 Of the brokers who continued to have a negative outlook in July, most cited these big-picture macro pressures as the heaviest weight on a healthy real estate market, with several also expressing general displeasure with federal policy and the current administration.

Bob Stallings, a broker with RE/MAX in Long Beach, California, said consumers are very aware of these factors, which directly or indirectly affect them as buyers and sellers.

“Inflation and higher interest rates are slowing the market. About a third of the listings are being reduced in price. This is all having an effect on buyer confidence,” he explained.

“Rising rates, inflation, shortage of inventory causing housing prices to continue increasing,” noted Harold Crye of Crye-Leike Real Estate Services in Tennessee. “Many buyers being priced out of the market. Forced to remain as renters.”

Some brokers are already experiencing what feels like relief in this new market, however, and certain economists are hopeful that supply and demand are moving back into balance—though there remains plenty of room for error along the way. Buyers discouraged by increasing rates might step back even though inventory is finally starting to open up after more than a year of historic scarcity.

“Inventory growth giving consumers more choice,” said Rob Orth, a broker for Sotheby’s in the red-hot Coeur d’Alene, Idaho market. “Interest rates have risen but are still low compared to historical rate numbers. Pricing has leveled out due to some decreased demand.”

“This is a blessing for agents and the buying public,” said Lance T. Hanson, broker at RE/MAX Real Estate Concepts in Des Moines, Iowa. “We have to slow down a little to sustain.”

In the short term, some brokers cited pent up demand for travel and vacations as possibly slowing summer activity. Kimberly Minor, a RE/MAX broker in Arkansas, said consumers are trying to close and move before the new school year, predicting that sales might keep “hopping” through August at least.

Looking ahead on the medium-term, big-picture issues, monthly inflation data will certainly have an effect on both consumer confidence and mortgage rates, with Fed Chair Jerome Powell saying he wants to see multiple months of decreasing inflation before altering the current course of heavy rate hikes.

Additionally, 11% of BCI survey respondents in July mentioned policy or the federal government as a specific concern going forward. The Biden administration has sought to address the ongoing housing crisis through a series of legislative and executive actions, releasing a broad policy roadmap in May of this year after $300 billion in investments toward housing priorities sank with the Build Back Better package.

In the longer term, increasingly unaffordable and scarce housing are likely to weigh on the market, and big-picture policy solutions have so far remained elusive.

“There is always a place for a professional REALTOR®,” said Tom Cox, another RE/MAX broker operating in Kentucky. “It’s the ability to swing with the market’s pendulum.”

Land and Retain Top Talent for Your Brokerage This Year