After a momentary reprieve, RISMedia’s Broker Confidence Index (BCI) took another fall last month, dropping from 6.8 to 6.6, continuing a slide that has persisted since the survey launched in December of last year.

Against the backdrop of a clear pullback in home sales affecting a broad swath of real estate markets, rising mortgage rates and global economic uncertainty, brokers have steadily seen conditions worsening over the last year. After July saw the BCI tick up fractionally—from 6.7 to 6.8—there seemed to be a possibility that brokers were seeing a floor.

But that was not the case, as leaders at some of the largest brokerages around the country indicated in August they are still not feeling great about the state of the industry as schools return and summer fades.

“I believe we are normalizing on the summer season,” said Larry Rideout, CEO of Gibson Sotheby’s International Realty in Boston. “It has been frenetic the last two summers and everyone is taking a breath. The shift is making all pause also.”

As there is growing recognition that racial inequity, inventory shortages and affordability issues are all structural problems that preceded the pandemic, we also asked brokers this month what they thought the federal government was doing—if anything—to address the housing crisis.

A clear majority of brokers think the government is in fact, making things worse in housing. 65% of survey respondents said they felt this way, with 39% saying the government was making the housing crisis significantly worse.

“The government at all levels continues to make affordability of housing worse with over regulation and costly development requirements. With the critical housing shortage, in our country, the government has no plan to assist construction, especially in affordable first-time home buyer housing,” he said.

An analysis conducted by the National Association of Homebuilders last year estimated that 23.8% of the cost of a new single-family home can be attributed to regulation (federal, state and local). 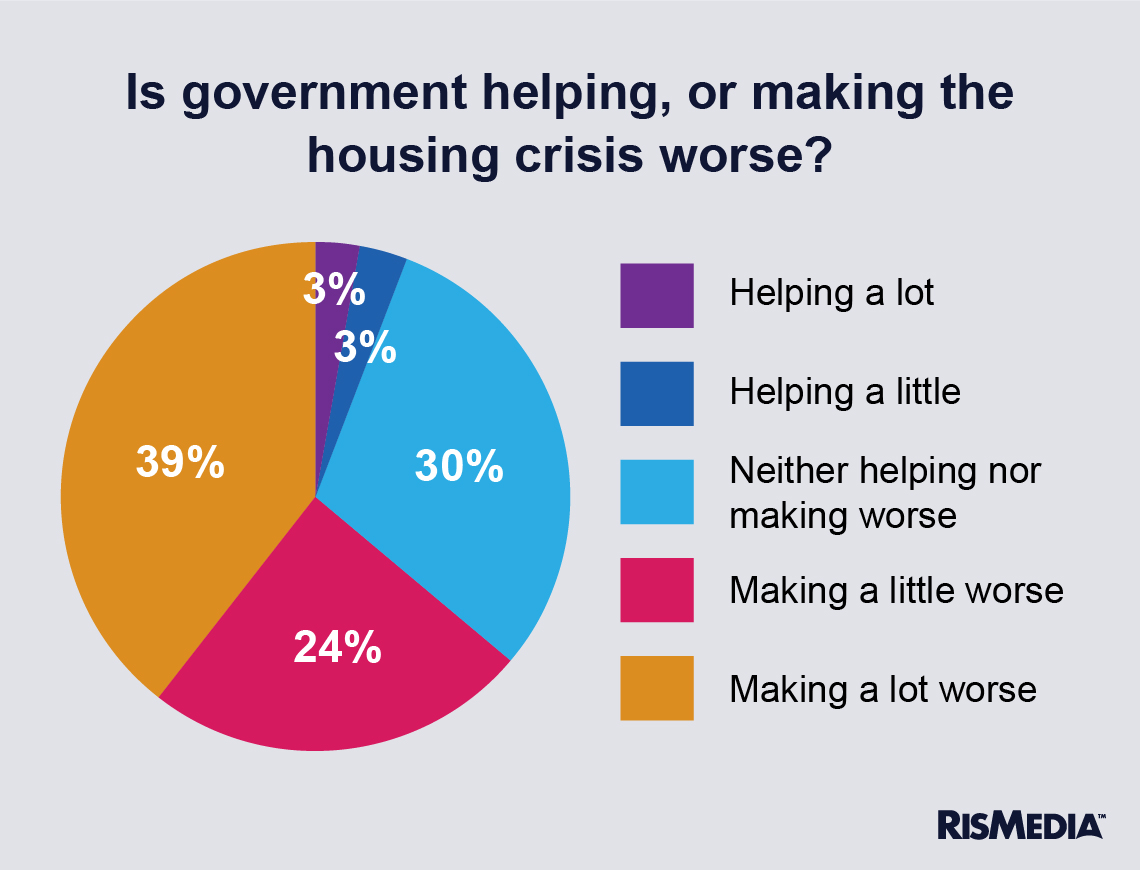 “Any government meddling worsens market conditions. How can it possibly create more inventory? Beyond arbitrarily putting a ceiling on interest rates, which is impossible, what can the federal government do?” wondered Peter Hunt, broker, chairman and CEO of HUNT Real Estate in New York.

Others echoed this sentiment—that the federal government is just generally unable to affect the notoriously local real estate landscape. Even brokers who were less critical saw little reason to think that federal policy could provide solutions to housing issues.

Casey Bryan, president of Berkshire Hathaway HomeServices Florida Properties Group said she and her company “do not see much action surrounding those topics by local or national government agencies.”

Housing was a large part of the failed Build Back Better legislation that was sunk by centrist Democrat Joe Manchin early this year. That bill—which would have invested somewhere around $300 billion in housing or housing-related initiatives—was broadly supported by the real estate industry.

President Joe Biden has since released a roadmap of legislation and executive actions largely mirroring Build Back Better’s priorities, though much of that plan remains out of reach. A push by Biden for increased support of funding for ADUs was mostly well received by lenders and housing advocates. Legislators have also come up with some creative proposals to address the crisis.

Notably, even though the BCI fell sharply, the number of brokers who are extremely optimistic about the industry—rating their confidence as either 9 or 10—actually increased between July and August.

In July, 10.7% of respondents expressed this high level of confidence, while in August, that proportion nearly doubled to 21.1%.

Christopher Krzemien, broker/owner of RE/MAX Experience – The Tom Wolf Team in Florida, said things are actually looking up for his business.

“My sales numbers are strong. My talks with economists are painting a good picture of what is happening in the market and I am not worried,” he said.

Simultaneously, though, the proportion of brokers who were extremely pessimistic—reporting a confidence rating of 4 or lower—also rose significantly, from a fractional 0.6% last month to 10.6% this month. Those brokers were succinct in their reasoning—pointing to inflation, a lack of home sales and general uncertainty ahead.

Brokers who felt the government is making the housing crisis significantly worse were more likely to have lower confidence in the industry as a whole. Those respondents rated their confidence as 5.6 on average, while the average of all other respondents was 7.3.

“The national media will likely continue to talk about declines year over year without any historical context. The consumer will simply be given a repeated negative message which may affect consumer confidence,” said Ryan Carrell, director of Relocation and Client Services at Carpenter REALTORS® in Indiana.

Even as interest rates have spiked, they are nowhere near historic levels, and prices have remained sticky despite a significant downturn in sales. Home sales were down over 20% in July compared to last year, but roughly equal to July of 2019—4.81 million annualized this year, compared to 4.84 million in 2019.