Section 1:Who Is Marketing, and How Much?

You might think that you are investing a similar amount of time and money in marketing compared to your peers—but are you? How much do most agents spend to get in front of potential clients in the first three years of their career? Do brokers signed with national franchises invest differently than independents? Knowing your colleagues and competition is a key part of refining your marketing strategy in an increasingly competitive industry.

First, and maybe most importantly, is that agents and brokers regardless of affiliation, age or time in the industry are putting significant amounts of time and energy into their marketing. For agents, the average annual expenditure on marketing personal brands was $5,873. Brokers spend an average of about $50,000 on marketing initiatives—excluding internal marketing salaries. Almost one-fifth (17%) spend more than $100,000 every year just on marketing, while a similar proportion of agents (20%) spend more than $10,000 a year on marketing their brands.

That is a lot of money. Even agents new to the industry (in their first three years) spent an average of about $2,500 on marketing. Almost a fifth of those newer agents (19%) spend $5,000 or more—especially notable since those agents are only earning between $52,000 and $82,000, according to the National Association of REALTORS® (NAR). 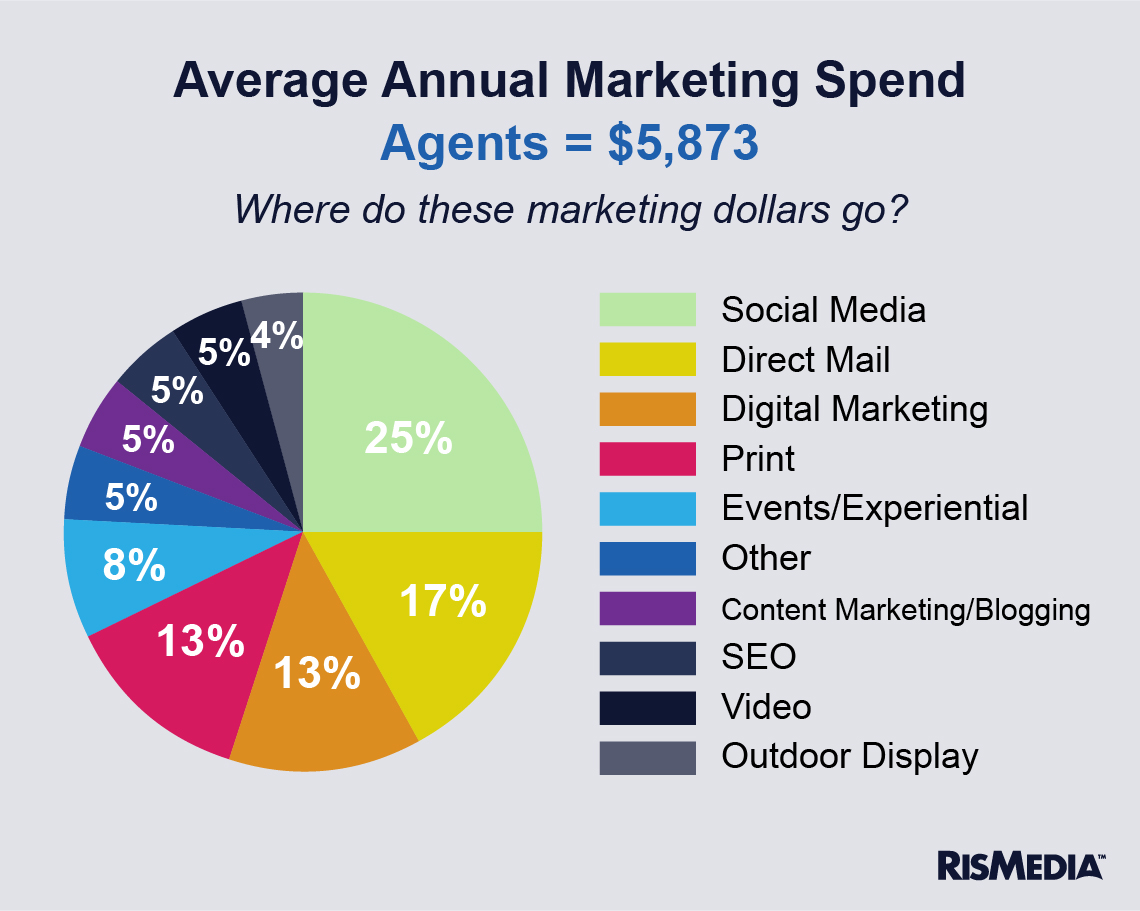 Notably, on the broker side, those who have been in the industry for 15 or more years spend far more than those who have less experience. Those veteran brokers spend just under $53,000 annually on marketing listings alone, while brokers in their first 15 years spend on average about $18,300. Veterans also spend close to $25,000 on recruiting and retention compared to $6,875 for less experienced brokers.

At the same time, a significant number of brokers spend little to nothing on recruitment and retention. Almost a third (31%) spend nothing to recruit and retain agents—and veteran brokers are actually more likely to zero out this line. Only 22% of those with less than 15 years of experience had no budget for this item, while 33% of those with more than 15 years of experience did not have a recruiting and retention budget. 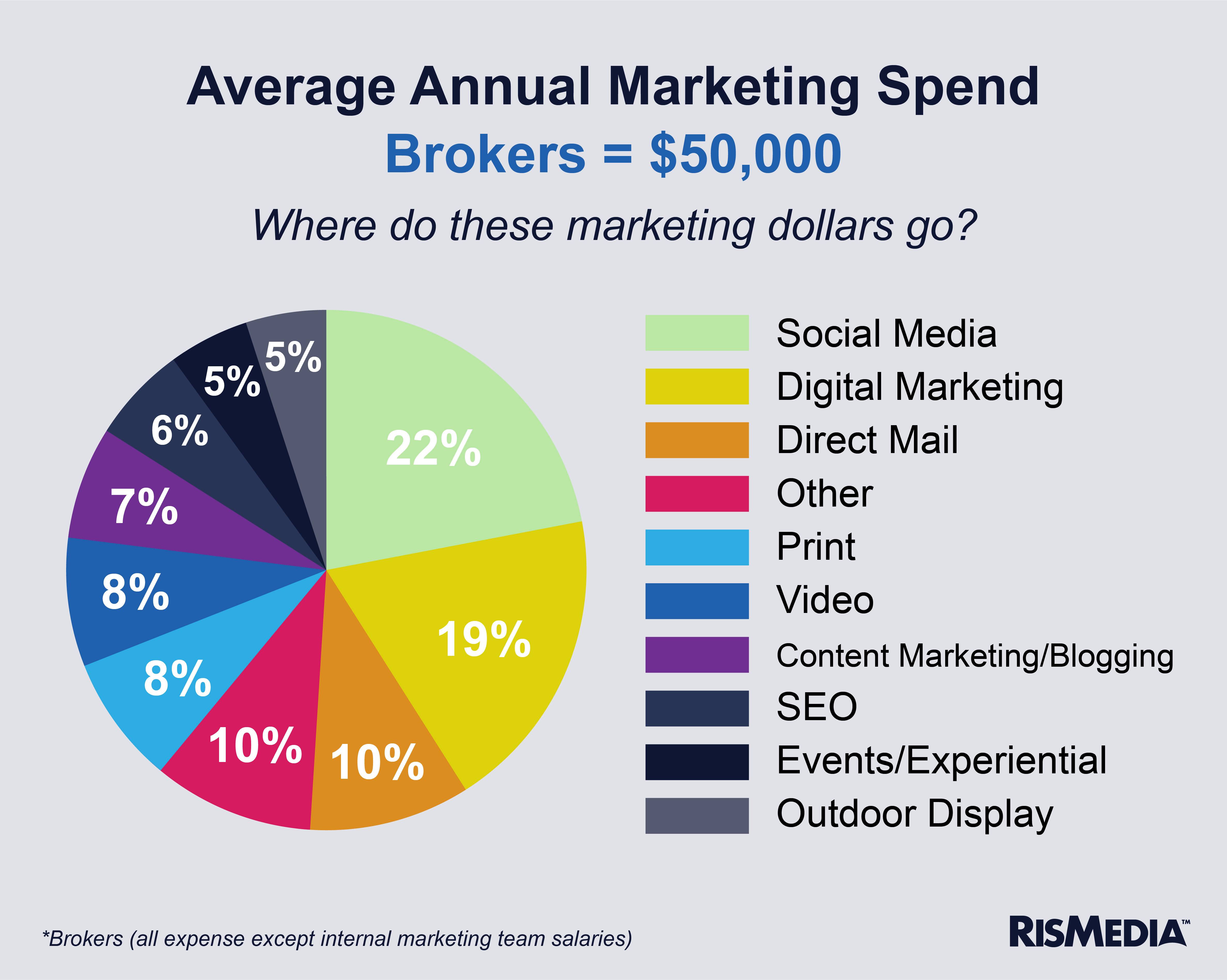 But brokers still believe that recruitment and retention is highly important, with 38% ranking retention as an 8, 9 or 10 on a 10-point scale (where 10 is extremely important and 1 is not important at all), and 31% doing the same for recruitment.

For agents, direct marketing of a listing is often a significant investment (two-thirds of agents do all of their own marketing). Agents spent on average 3.2% of list price marketing each home. More experienced agents (15-plus years) spent 3.5%, while agents in their first three years spent significantly less—2.6% on average. More than two-thirds (67%) spent 1% or less of the listing price on marketing.

Brokers spent 4.47% of list price on average (though 55% said they contribute nothing). Veteran brokers spent far less in this category (3.65%) compared to less experienced brokers (8.74%).

Region didn’t always have a huge effect on how much agents and brokers spent on marketing—though it sometimes made a difference. Agents in the West spent more marketing their personal brands, almost $2,000 more than the national average. Brokers in the South spent far less marketing their agents’ listings—an average of $25,700 compared to about $76,000 in the Midwest and Northeast and $101,000 in the West.

Perhaps more important than where people are spending their money is where they spend their time and energy. Agents spend on average over eight hours a week marketing their personal brand, with 12% spending 20 hours or more. Agents in their first three years were more likely to dedicate large amounts of time to marketing themselves, with 46% spending 10 or more hours and one-fifth spending 20 or more hours a week.

The groups spending the least amount of time marketing were agents in the Midwest—who only spent 5.25 hours a week on average marketing their brand—and agents older than 65, who spent an average of 7.65 hours.