Section 4:Who Pays, and What Happens Next?

Do national franchises front more marketing dollars than independents? What type of brokerage is more likely to pay for recruitment and retention? And what kinds of agents are most likely to do their own marketing? The answers to these questions will almost certainly surprise you. More importantly, maybe, is what brokers and agents are planning for the future—cutting back, reinvesting or reinventing their marketing strategies.

Between national franchises and independents, there was actually very little difference in how much brokers spent annually to market agents’ listings. Independents, in fact, spent about $1,000 more annually on their agents. And independent brokers spent far more as a percent of list price per house—4.92% compared to 2.7% for national franchises. Hybrid/self-employed brokers invested even more—5.5%.

A little more than half of all brokers (55%) said they paid nothing for agents’ marketing. Self-employed brokers were more likely to not pay (62%), though again, there was little difference between national franchises and independents (54% to 52%).

Brokers with national franchises were far more likely to have an internal marketing team, however—46% compared to 18% for independents and 10% for self-employed.

In terms of investment in recruitment and retention, national franchises led the way in overall spending—an average of about $34,700 annually. Independents still made a significant investment in keeping and attracting agents at $21,600 spent, while self-employed brokers spent a modest $6,900. 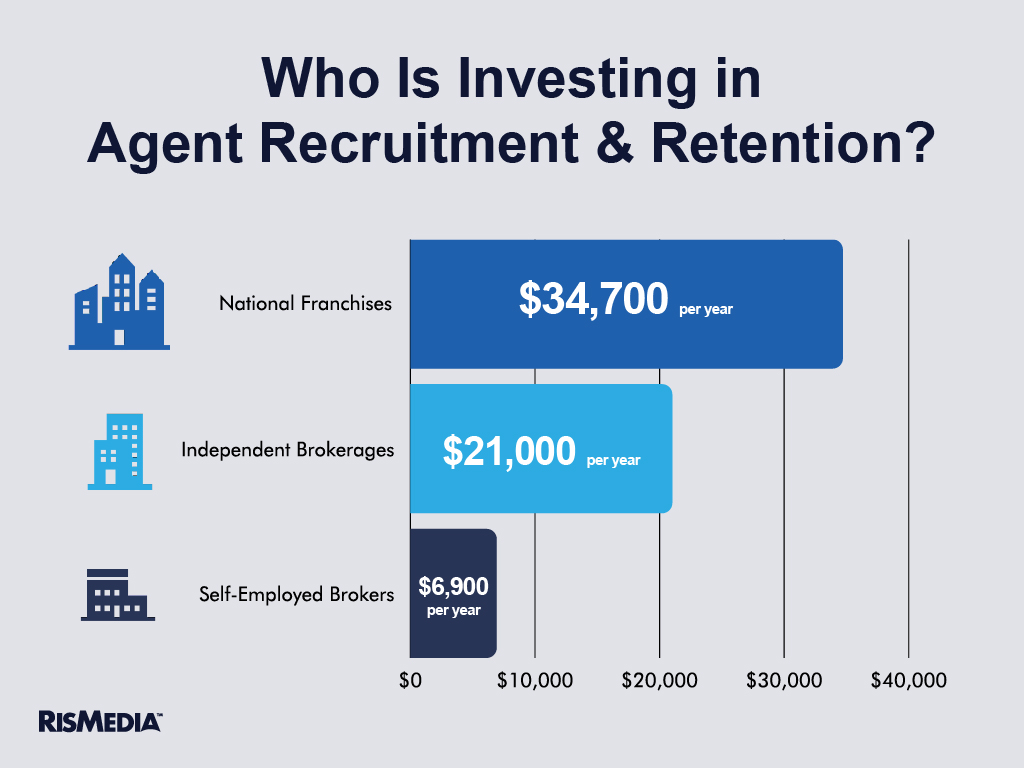 But as the real estate market transitions—hopefully without too many bumps—the question of how agents and brokers are adjusting their marketing plans might be the most pertinent one.

For those that spent more, increases in marketing expenditures were significant. Of those that added to their budget, the average increase was 25%. But at the same time, the smaller number of agents who cut back also did so significantly, by an average of 35%.

Looking ahead at the next 12 months, agents mostly said they are keeping their marketing spend for their personal brand the same, with 57% saying they would spend the same next year as they did this year. And more than a third (35%) said they were actually going to spend more than they did this year. New agents were much more likely to say they were going to spend more—51% compared to 27% of agents with 15 or more years of experience. More agents planned to hold their budgets steady. Only 8% planned to cut their budgets.

Brokers are feeling roughly the same confidence. Almost two-thirds (64%) said they had planned to keep their firm’s entire marketing budget the same, and 31% said they would increase it next year. But brokers came into this year a little more cautiously than agents. Most held steady or cut their budgets—60% keeping the same marketing budget, and 13% reducing it. And while time in the industry did not affect how likely a broker was to spend more or cut back next year, age did. Brokers 55 and older were far less likely to plan increases in their budgets for next year, with an overwhelming 70% saying they would keep it the same (compared to 56% of brokers younger than 55).

For those brokers planning increases or decreases, the breakdown was similar to agents. The average increase was around 25%, while the average cut was 27%.

For brokers, national franchises were slightly more likely to anticipate a marketing increase (35% compared to 30% for independents and 28% for self-employed). For agents, there was very little difference between independent and national franchises as far as planned marketing expenditures—though self-employed/hybrid agents were slightly more likely to cut back or keep the same budget.

Editor’s Note: Not all percentages within graphics will add up to 100% due to rounding.