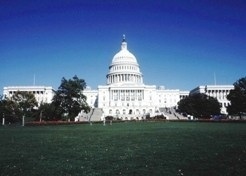 RISMEDIA, Dec. 18, 2008-(MCT)-By cutting its benchmark lending rate to historic lows Tuesday and promising to combat the U.S. recession head-on and aggressively, the Federal Reserve served notice that more unconventional actions probably are ahead as it fights to reverse the nation’s economic woes.

The Fed pushed its federal funds rate from an already low 1% to a target range of 0 to 0.25%. This marks the lowest point ever for this target rate, which banks charge each other for overnight loans. The funds rate serves as a benchmark for a wide range of loans in the U.S. economy.

The Fed’s rate cut was larger than expected, and highly unusual, as the Fed usually targets a specific rate instead of a range. The move highlighted the Fed’s determination to act aggressively along with the reality that the U.S. recession is deepening rapidly.

Evidence of that came from the Commerce Department, which reported that housing starts fell 19% in November and 47% on a year-over-year basis. New residential construction has fallen to levels not seen in almost half a century.

On top of grim retail sales, mounting job losses and sagging exports, the U.S. economy is struggling on many fronts.

In theory, the Fed’s action should reduce the cost of borrowing for consumers and businesses, since the prime rate-what banks charge their best customers-moves in tandem with the federal funds rate.

The prime rate typically influences rates for car loans, student loans, credit cards and other debt. With Tuesday’s cut, the prime rate is expected to fall to 3.0 to 3.25% from 4%.

However, despite the attractive rates, banks aren’t lending to most consumers and businesses. Weak financial institutions continue to hoard cash and build their balance sheets, with little appetite for risk in new loans. That’s worsening the economic downturn, especially since it hurts consumers, who drive almost two-thirds of U.S. economic activity.

In a statement, the rate-setting Federal Open Market Committee said: “The outlook for economic activity has weakened further … the Federal Reserve will employ all available tools to promote the resumption of sustainable economic growth and to preserve price stability.”

A senior Fed official, briefing reporters late Thursday on the condition of anonymity in order to speak freely, said that a rate range was chosen because the real federal funds rate-what banks actually charge-has been well below the Fed’s target in recent months.

The Fed’s statement said that “weak economic conditions are likely to warrant exceptionally low levels of the federal funds rate for some time.”

The Fed has little room left to maneuver on interest-rate policy now and will use other tools.

“They are saying that they have unlimited arrows. As the central bank of the United States, it is the only entity that can write checks on itself without limit, and that’s a very powerful weapon the Fed has against the downturn,” said Marvin Goodfriend, a former research director at the Federal Reserve Bank of Richmond who’s now an economics professor at Carnegie Mellon University in Pittsburgh. “It won’t work immediately, but if it is used aggressively, it will work.”

Chief among those other tools is to keep lending aggressively; the Fed’s balance sheet already has gone from about $800 billion to $2.2 trillion as it pulls out all the stops to confront the worst financial crisis since the Great Depression.

Fed Chairman Ben Bernanke next can scale up existing Fed lending facilities or create new ones, Goodfriend said. The Fed statement said that the central bank was weighing the possibility of purchasing long-term Treasury bonds, which would drive down their yield and make other investments such as corporate and municipal bonds more attractive.

“The Fed did it before in the 1940s and it could do it again,” said Vincent Reinhart, a former chief economist of the Fed’s rate-setting body who’s now a scholar at the American Enterprise Institute, a conservative policy institute in Washington.

The Fed’s statement also said that it will extend credit to households and small businesses early next year. Other experts think that the Fed will increase its purchases of troubled assets to unclog credit markets.

“The Fed’s next step is to ramp up its purchases of various financial securities to bring down borrowing costs to households and businesses,” said Mark Zandi, the chief economist for forecaster Moody’s Economy.com in West Chester, Pa.

In another creative step to boost the housing market, the central bank also has been purchasing pooled mortgages-called mortgage-backed securities-and debt issued by Fannie Mae and Freddie Mac, the mortgage finance giants that the government seized in September. The senior Fed official said that efforts to purchase mortgages backed by Fannie Mae and Freddie Mac were being ramped up.

The Fed will take additional aggressive steps along those lines in the weeks and months ahead, Zandi predicted.

“They will soon be buying long-term Treasury bonds and will then branch out to high-grade corporate bonds, private-label mortgage securities, asset-backed securities and, if conditions get particularly bad, corporate equity,” he said. “The Fed has the ability to purchase just about anything, and they will do so if they think it will help unfreeze credit markets.”

President-elect Barack Obama noted Tuesday during a Chicago news conference that the Fed has cut interest rates almost as low as possible. That makes it “critical that the other branches of government step up” and work to stimulate the economy as well, Obama said, underscoring his determination to push a massive stimulus program next month upon taking office.

“Look, we are going through the toughest time economically since the Great Depression, and it’s going to be tough,” Obama said. He reiterated that his program will save or create 2.5 million jobs and will work to spur an early rebound and long-term investments in a stronger economic foundation.

The Fed’s statement didn’t mention aid to Detroit’s Big Three automakers, but Treasury Secretary Henry Paulson did in an interview on CNBC. He said that the Treasury was studying how best to provide the Big Three with a bridge loan that would sustain them in the short term and help them restructure toward long-term viability.

“We want to do it right,” Paulson said, adding that no one wants to see the consequences of a Big Three failure in the current economic circumstances. Up to 3 million jobs could hang in the balance, analysts say.

The Fed got a bit of good news Tuesday before its announcement, when the Bureau of Labor Statistics reported that inflation fell in November. The BLS said that consumer prices fell 1.7%, the second straight month with a record decline in inflation.

On a year-over-year basis, consumer inflation rose 1.1% from November 2007 to last month.