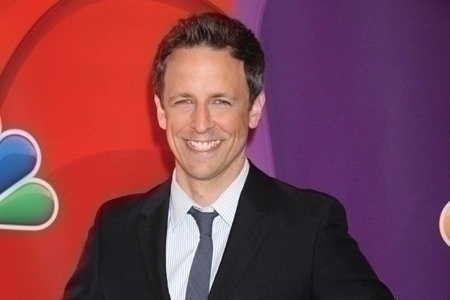 Things are going pretty well for former “Saturday Night Live” head writer Seth Meyers. Not only does he have his “SNL” credentials to boast about, but Meyers is taking over as host of “Late Night” following his buddy Jimmy Fallon’s move on over to “The Tonight Show.” Along with the new job, Meyers sealed the deal with his long-time lady and the now-married couple bought a spiffy new apartment in the West Village.

The couple paid $3,525,000 for their 994-square-foot, two-bedroom, two-bathroom apartment in the chic New York City neighborhood. In addition to gorgeous views of downtown Manhattan, the apartment has hardwood floors throughout and plenty of storage space with four super-spacious closets (including a couple of walk-ins). A five-sided foyer steps down to a 26-foot-long living room with a wood-burning fireplace. From there is a dining room and recently renovated window-laden kitchen. It’s a pricey purchase considering the square footage, but a newfound TV host needs a swank new pad to wind down in.