Existing-Home Sales Increase for the First Time in Six Months

An arrow shaped red "Home For Sale" sign in front of a suburban 2-story home. The green grass and blue sky is visible in the background. 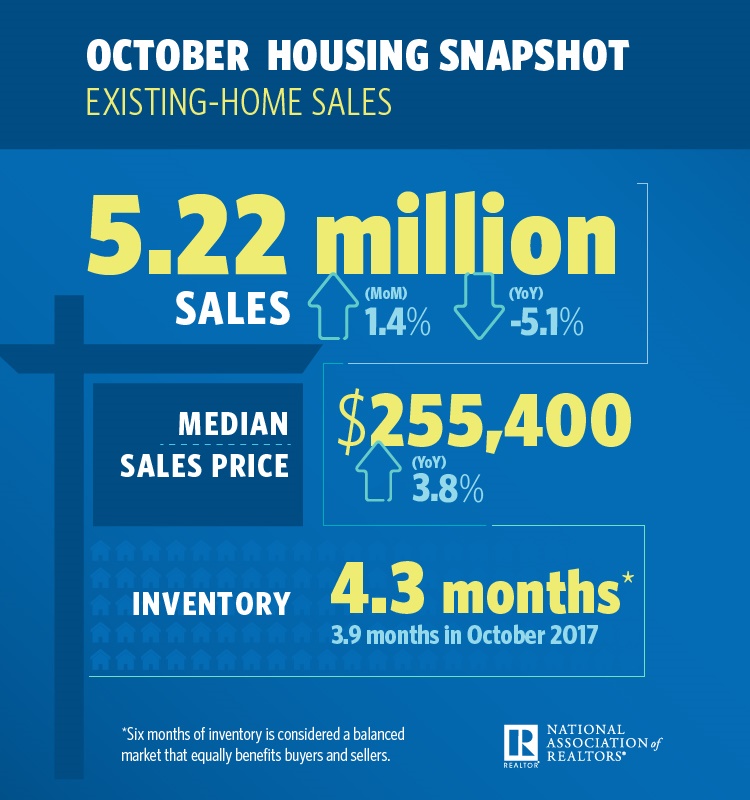 Lawrence Yun, NAR’s chief economist, says increasing housing inventory has brought more buyers to the market. “After six consecutive months of decline, buyers are finally stepping back into the housing market,” he said. “Gains in the Northeast, South and West—a reversal from last month’s steep decline or plateau in all regions—helped overall sales activity rise for the first time since March 2018.”

Total housing inventory at the end of October decreased from 1.88 million in September to 1.85 million existing homes available for sale, but that represents an increase from 1.80 million a year ago. Unsold inventory is at a 4.3-month supply at the current sales pace, down from 4.4 last month and up from 3.9 months a year ago.

“As more inventory enters the market and we head into the winter season, home price growth has begun to slow more meaningfully,” said Yun. “This allows for much more manageable, less frenzied buying conditions.”

“Rising interest rates and increasing home prices continue to suppress the rate of first-time homebuyers. Home sales could further decline before stabilizing. The Federal Reserve should, therefore, re-evaluate its monetary policy of tightening credit, especially in light of softening inflationary pressures, to help ease the financial burden on potential first-time buyers and assure a slump in the market causes no lasting damage to the economy,” says Yun.

First-time buyers were responsible for 31 percent of sales in October, down from last month and a year ago (32 percent). NAR’s 2018 Profile of Home Buyers and Sellers—released in late 2018—revealed that the annual share of first-time buyers was 33 percent.

“Despite this much-welcomed month over month gain, sales are still down from a year ago, a large reason for which is affordability challenges from higher interest rates,” said NAR President John Smaby, a second-generation Realtor® from Edina, Minnesota and broker at Edina Realty. “Prospective buyers looking for their dream home in this market should contact a Realtor® as a first step in the buying process to help them navigate this more challenging environment.”

Agents Believe Teams Are Key to Remaining in the Industry: Survey

RISMedia’s Newsmakers: Shining a Light on the Industry’s Iconic Leaders

How Does a Broker’s Price Opinion in Real Estate Work?

Innovator or Imitator: A Deep Dive Into What Makes Compass Tick

Building With Purpose: Lessons From a Real Estate Power Couple

The Andersons, Alisha and Paul, started their team in Mesa, Arizona, in 2018 and have already risen to the Top... Read more.