Existing-Home Sales Off to Shaky Start

Existing-home sales faltered in January, disappointing at 4.94 million and marking the third month in a row sales have underwhelmed, the National Association of REALTORS® reports. Compared to December and last January, there were 1.2 percent and 8.5 percent fewer homes, respectively, sold. 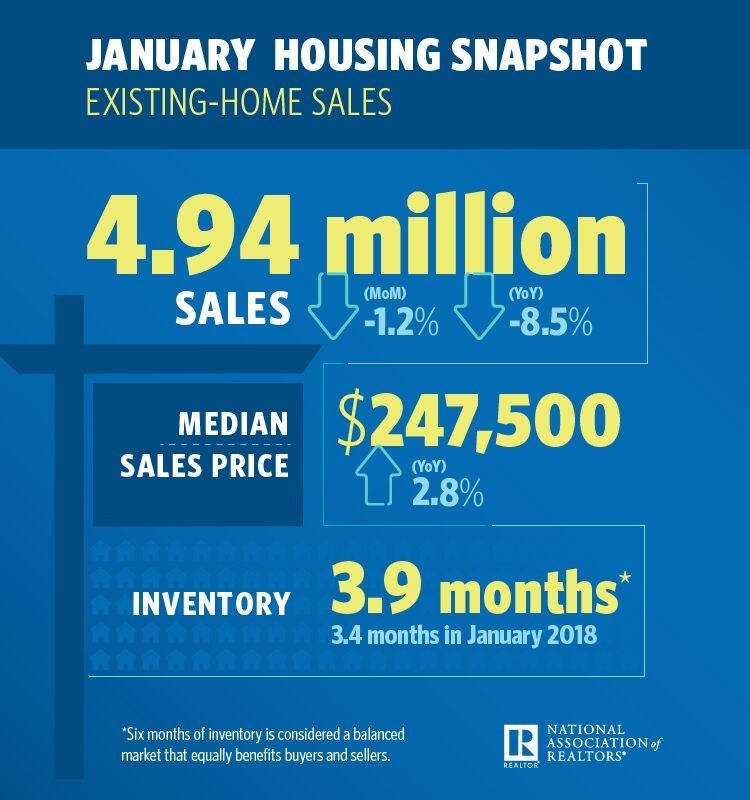 A bright spot? Considerable gains in for-sale supply. January’s inventory level rose to 1.59 million units, climbing from last month and the prior year—in December, there were 1.53 million for-sale homes; last January, there were 1.52 million.

According to NAR, there are brighter days for homebuyers on the horizon.

“Existing-home sales in January were weak compared to historical norms; however, they are likely to have reached a cyclical low,” says Lawrence Yun, chief economist at NAR. “Moderating home prices combined with gains in household income will boost housing affordability, bringing more buyers to the market in the coming months.”

“Decelerated sales and the increases in inventory will work in favor of potential homebuyers, putting them in a better negotiating position heading into the spring months,” says John Smaby, NAR president. “On top of that, low interest rates will bring an additional $80 per month savings compared to the rates of just a few months ago.”

Currently, inventory is at a 3.9-month supply, according to NAR. In January, the average listing was on the market for 49 days, or seven days longer than the prior year. Thirty-eight percent of homes were on the market for less than one month.

Of the existing-home sales in January, 4.37 million were single-family—a drop from 4.45 million in December and 4.77 million last January. Condo and co-op sales totaled 570,000, a 3.6 percent bump from December, but down 9.5 percent year-over-year.

Twenty-three percent of sales were all-cash, and 16 percent by individual investors, according to NAR. Four percent were distressed. First-time homebuyers comprised 29 percent of sales.