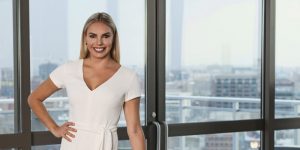 Technology-focused real estate giant Compass today announced a significant new addition to their team as Grace Goro Kaage, who most recently served as a vice president and managing broker at independent Chicago-based @properties, will take over as the company’s new managing director, overseeing much of the Midwest.

In a release, Compass lauded Kaage’s “wealth of philanthropic, organizational and managerial expertise,” as well as her “deep understanding” of the Chicago real estate market.

“I’ve sold in this environment and so I understand the unique challenges our agents face today. Compass is simplifying the process and improving the client interaction to help agents grow across the country,” Kaage said in a statement. “That’s an evolution I knew I needed to be a part of, and one that I could positively impact.”

Named a VP for @properties in 2019 at age 30, Kaage boasts both an impressive resume and lineage. Her father, Chuck Goro, was a longtime fixture in the Chicagoland real estate industry for almost 40 years according to the release, and @properties had recently named Kaage a co-manager of their new 5,800 square-foot downtown “flagship” office, according to the Chicago Star.

Kaage and her teams have also received numerous awards, including being named one of Crain’s 2018 Most Influential Residential REALTORS® in Chicago and part of a 2017 Top Producer Team.

According to Compass, she will lead growth strategies and agency experience across major metros in the upper midwest, including Chicago, Milwaukee, Indianapolis and Minneapolis, aiming specifically to increase the company’s footprint in Chicago.

“The real estate industry is rapidly changing and agents today deserve a brokerage that’s willing to invest in the technology and resources necessary to provide exceptional service to clients in this landscape,” Kaage said in a statement. “Compass is that brokerage.”