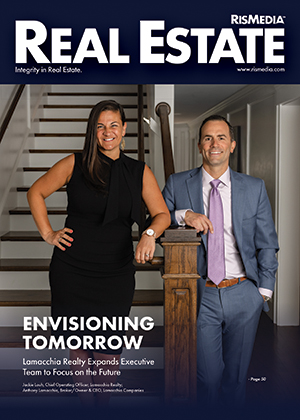 Even as a temporary receptionist, Jackie Louh turned heads when she started working for Anthony Lamacchia in 2010.

“We knew two days in that she was special,” says Lamacchia Companies Broker/Owner and CEO Anthony Lamacchia. “Within a couple of years, she became an agent on my team, since we were a team model at that time, and she quickly rose to become the No. 1 listing agent, selling over 640 properties in five years. Then, in 2017, she got into management and quickly excelled.”

Now, as the Massachusetts-based brokerage approaches $2 billion in annual sales, Lamacchia and his trusted executive team have set the stage for the next phase of the firm’s growth by promoting Louh from Vice President of Business Development to Chief Operating Officer, giving the company founder a much-needed number-two person. The move will allow Louh to keep the firm firing on all cylinders so that Lamacchia can do what he does best—envision the future and host more REALTOR® trainings.

As with most entrepreneurial success journeys, there comes a time when further growth requires entrusting others. The past two years became that inflection point for Lamacchia. The company entered a rapid growth phase, reaching just over $1 billion in sales in 2020 (a figure it then quickly surpassed), opened an office in Fort Lauderdale, Florida, increased agent count to over 500 and deftly rode the wave during one of the hottest real estate markets on record.

As the successes mounted, however, Lamacchia watched his company’s growth with a protective eye.

“One thing I have always made sure of during our growth is not to ruin what we build,” he says. “I learned from working in a family business as a kid that growth is only part one of building a business—part two is maintaining it and keeping things in order as it happens. This is why I always make sure our staff levels are a little higher than they need to be—to make sure we can handle the growth.”

This strategy of building a team to facilitate growth became necessary at the executive level as well.

“Over the last year or two, most of my day has been eaten up being the implementer, and very little of my day is spent being the visionary,” Lamacchia explains. “When you’re running a business, there are visionaries and integrators—some possess the ability to do both, and I fall into that category. But if you do both for too long, you hamstring your own growth. I fell into that trap in the last two years.”

That’s why the appointment of Louh is a critical next step for the future of the firm.

“With Jackie going to this role, we will be able to roll out new initiatives more often and execute them even faster,” says Lamacchia. “Our speed of execution has slowed down over the last couple of years, and I intend to increase that again.”

The decision to appoint Louh as COO was unanimous. “I was fortunate to have a lot of good choices, but every time I considered various other people, my mind kept coming back to Jackie,” says Lamacchia. “Everyone was on board with it. Jackie will be the ultimate implementor and will enable me to go back to spending more of my time being the visionary.”

A Rockstar From the Get-go

While Louh now holds the company’s No. 2 spot, she brings with it humble beginnings and varied experience.

Starting at the company in 2010, Louh joined Lamacchia in its pre-brokerage iteration as an agent team model. She came on board from a temp agency and began as a receptionist, and then embarked on a series of career advancements within the firm, succeeding as a top-producing agent and then making the transition to management. According to Louh, this path was essential to achieving the COO role.

“I think the reason I ended up in leadership is because of what I did as an agent,” she says. “I had more sales than any other agent in the company, and I was able to handle more clients. I think Anthony recognized that and realized I could be putting my talents to better use helping and leading others. I learned everything from Anthony and now I bring that to our agents. I appreciate his support and guidance over the years and am truly honored to be in this position.”

Lamacchia also recognized Louh’s ability to bring on new agents. “In 2018, I appointed her to build a business development department so we could have a team of people solely focused on recruiting and retention, and she made it happen in a big way,” says Lamacchia. “She came into the role having no prior experience in that area. What she did bring to the table was knowing the company, being a natural hustler who can handle a lot and being a likable, magnetic person.”

Lamacchia is not alone in his assessment of Louh. His close-knit executive team wholeheartedly supported the decision; in fact, those who had previously served as Louh’s manager became staunch advocates of her becoming COO.

Vice President of Finance Sarah Chaisson, for example, was the first to spot Louh’s potential. “I knew from the first day that she would be a rockstar,” says Chaisson, who also holds the distinction of being Lamacchia’s first employee. “She was the No. 1 agent when we had the team. She’s an extremely hard worker who puts everyone else first. She’s very driven and focused…a go-getter and a doer.”

According to Chaisson, having Louh in the COO role will take the pressure off of Lamacchia, enabling him to act as visionary. “This will allow us as a company to do bigger and better things,” she says.

Vice President of Operations Angela Rastellini seconds that thought. “Right now, Anthony is too sucked into the day-to-day,” she explains. “As we grew, he didn’t have time to be the visionary he is, and that really made us what we are. We will only expand and grow if he can focus on doing that.”

As Louh’s former boss, Rastellini also recognized her potential. “She’s been a huge part of the growth of our agents,” she says. “She’s very positive and knows how to work the room. She’s very caring and a great leader.”

Lamacchia and Louh are similar in many ways, both energetic and driven. But when it came to Louh winning the COO role, two qualities stood out the most: her ability to handle a lot, and her magnetism. As Lamacchia says, “You can’t teach that.”

Louh recognizes these qualities in herself, pointing to her ability to take on a lot without getting overly stressed. “I have good bandwidth,” she says. “I know myself—I’m bored if I don’t have a lot going on. That’s why Anthony and I work so well together.”

Ready for the Storm

John Millen will continue heading up the company’s recruiting and retention efforts as Director of Business Development. With these changes, an immediate uptick in recruiting is expected as Lamacchia devotes more time to REALTOR® outreach through vehicles such as his highly successful Crush It In Real Estate training.

“Over the last couple of years, I’ve only been able to spend a minimal amount of time recruiting because I’ve been too busy running the company,” explains Lamacchia. “This change will have a big impact on recruiting because it will free me up to spend more time focusing on speaking and training. The more I get in front of REALTORS®, the better everything does. That’s my highest and best use.”

No one knows this better than Millen, who was compelled to pursue a real estate career after watching one of Lamacchia’s viral videos. And according to Millen, Lamacchia’s public-facing presence will be even more critical as the real estate market enters rocky waters.

“People want leadership,” he says. “There’s a storm coming in the market, and they want a captain on the boat who will take care of them and guide them. Most agents aren’t getting that. People need Anthony for his leadership.”

Chaisson agrees. “I think we have a big opportunity to bring over a lot of agents who are stuck at the moment because the market is so different now,” she says. “We’ve been through this before, and we know how to do well in this market. We can train agents how to succeed in this market.”

With that in mind, Millen’s goal is to “hire, hire, hire,” as he prepared to pass the 500-agent threshold at press time. But hiring will happen with great discernment.

“We want to grow, but also maintain what we have and not lose touch with what we develop,” Millen explains. “You can fall fast if you don’t do things right.”

Leadership for the Future

Lamacchia’s leadership is not only appreciated by his team, but by his industry peers as well. During the Leading Real Estate Companies of the World® conference held in Las Vegas this past March, Lamacchia was honored with the network’s Brokerage Leadership Award, which recognizes a principal broker for exemplifying extraordinary leadership. Lamacchia describes it as “one of the biggest honors of my life.”

Of course, Lamacchia’s team has recognized his extraordinary leadership all along. “He honestly taught me everything,” says Louh. “He is someone who genuinely cares about every person in the organization, which is by far the most important quality as a leader. And he explains why we do things—you can’t over-explain the why.”

Excellent leadership, both at the very top and throughout the executive team, will be more necessary than ever as the housing market decelerates from the breakneck pace of 2020 and 2021.

“We have entered a market-changing phase,” says Lamacchia, who’s known for his straight-talking social media videos where he doesn’t mince words about market realities. “The last two years have probably been the hottest real estate market we’ve had. I think it will be a long time before we see that again.”

But according to Louh, the strength of the Lamacchia leadership team will enable them to meet the challenges ahead, united and prepared. “We’ve all worked together for 10, 12, 15 years,” she says. “We all started from the beginning with the company vision in our heads.”

“It absolutely is a team effort,” agrees Rastellini. “We all grew in our roles and in the company together. We all did the same job at one point. We always helped each other and we do that to this day.”

Millen, too, has drunk the “Lamacchia lemonade,” as he says.

“Jackie as my boss, the whole management team…everyone gels,” he says. “They’ve been together forever, and they give us the tools to get stuff done. We have the freedom to be able to spend money if we can justify it, to give feedback and not be afraid. Everyone supports everyone.”

With Louh and an experienced, strong and collaborative executive team in place, Lamacchia Realty is well equipped to move full-steam into the future…no matter what the market dishes out next.

“We have been working very hard for a long time at growing and scaling the company, and our scale point hit in late 2018,” says Lamacchia. “By the time we got into 2020, when the market shifted into a higher gear following the pandemic and low interest rates, we were able to ride that wave.”

“With Jackie in this role, we will be able to roll out new initiatives more often and execute them even faster,” he adds. “To say I am proud of her and her trajectory with us would be an understatement.”