Existing home sales continue to free-fall, seemingly not yet hitting a floor as the market is now half a year into an accelerating decline, with July seeing a 16.2% year-over-year drop—even as other metrics paint a much more complicated picture around housing, according to the latest data from the National Association of REALTORS® (NAR).

With sales also down an ugly 5.9% from the previous month, rising mortgage rates, continuing acute issues with affordability and a lack of inventory seemingly have doused the runaway hot housing market. Even more concerning, July saw sales fall significantly across every region, as well as every price point.

“This is the first time in a long time where we’re seeing a sort of consistent trend of lower sales at all price points,” said NAR chief economist Lawrence Yun on a conference call.

Homes priced at $1 million or more saw sales drop 13%—not nearly as sharply as lower-priced homes, with properties going for $100,000 to $250,000 falling 31%. But the data is clearly a sign that economic conditions and housing market trends are beginning to affect all income levels.

While Yun explicitly called the current market a “housing recession,” unexpected juxtapositions of market conditions are seemingly the theme of real estate in 2022, with Yun pointing out that prices continue to rise and listed homes quickly move off the market, even with plummeting sales overall. 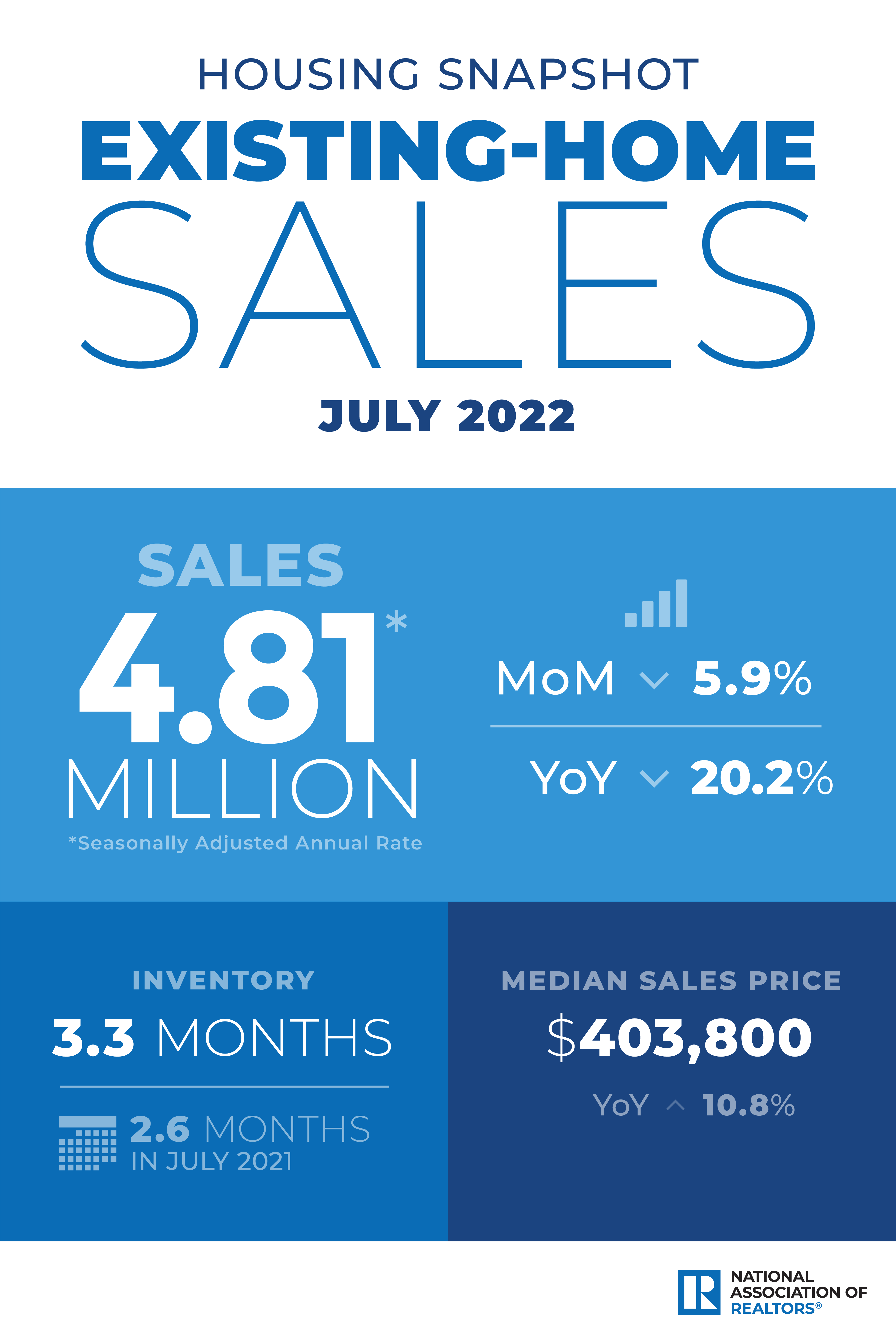 The average home had 2.8 offers in July, according to Yun, and spent 14 days listed—the latter number still an all-time record.

“One year ago, it was 17 days, so something unusual—it could be that residual psychology of the multiple offer situation where people got outbid by somebody else, so when a home shows up with the right pricing, they want to move fast,” Yun explained.

Almost 40% of homes are still selling at or above list price as well. Prices were up 10.8% year-over-year—only half of highs reached in recent months, but still double the appreciation of an average year, Yun pointed out.

Yun emphasized that anyone who bought a home is still “really comfortable financially” as homeowners are still comfortable with massive equity and continuing appreciation, on average.

Inventory remains a huge factor in where the housing market is going. July saw a 4.8% increase from June in available inventory, reaching a 3.3-month level of supply with 1.31 million units for sale.

But this seemingly positive development doesn’t tell the whole story, according to Yun, with seasonality rather than more fundamental factors responsible for the uptick in available homes.

“Every year there is a little more inventory hanging around in the month of July,” Yun said. “But compared to one year ago, no increase, which is—I’m not sure whether to say that this is a disappointing condition, because we wanted to see more inventory. We saw more inventory last month year-over-year, but now we are not seeing that increase.”

Yun said this deceleration of new housing supply could be at least partially explained by the “lock-in effect,” where people who have desirable mortgage rates are holding onto their homes.

Across the country, sales were down in every region, though not equally. While the Midwest, which Yun described as the most affordable region, saw a 3.3% drop in sales from June and a 14.4% decline year-over-year, the West—the least affordable region—saw a staggering 9.4% drop in a single month, down 30.4% from a year ago.

Distressed homes—foreclosures and short sales—remain “a non-factor,” according to Yun, at about 1% of total sales—essentially unchanged from last month and last year.

Games and Goals Alike Are Won in the 4th Quarter

Water Quality at Home: What You Need to Know

What Is a Prescriptive Easement?

You can dial in your PPC with a great CRM and often get 5-10x ROI. Visit REW.com/PPC to learn how.