Pending home sales fell again—at a faster rate than they did a month ago—as spiraling mortgage rates threaten to freeze real estate activity as much of the country prepares for the colder fall and winter months.

The National Association of REALTORS®’ (NAR) metric for pending sales fell 2% in August after a smaller 1% drop in July. The index is down 24.2% year-over-year.

“The direction of mortgage rates—upward or downward—is the prime mover for home buying, and decade-high rates have deeply cut into contract signings,” said NAR Chief Economist Lawrence Yun in a statement.

The decrease is no surprise, with sales falling consistently—and sometimes sharply—through the spring and summer, as the Federal Reserve’s efforts to combat inflation have helped drive mortgage rates to reach more than double their pandemic-era lows. Other leading indicators—building permits and housing starts—have also generally pointed toward medium-term decreases in real estate activity.

“As a result of both rising prices and escalating mortgage rates, the monthly payment for the typical homebuyer is now more than double what it was three years ago in some markets,” said Bright MLS Chief Economist Dr. Lisa Sturtevant in a statement. “The buyers who remain in the market are being more discerning, taking their time to look at properties and making offers that are below asking price.”

At the same time, foreclosures have remained low and prices have remained relatively strong, although there is no guarantee that this will hold, with most experts forecasting at least some regional price drops. 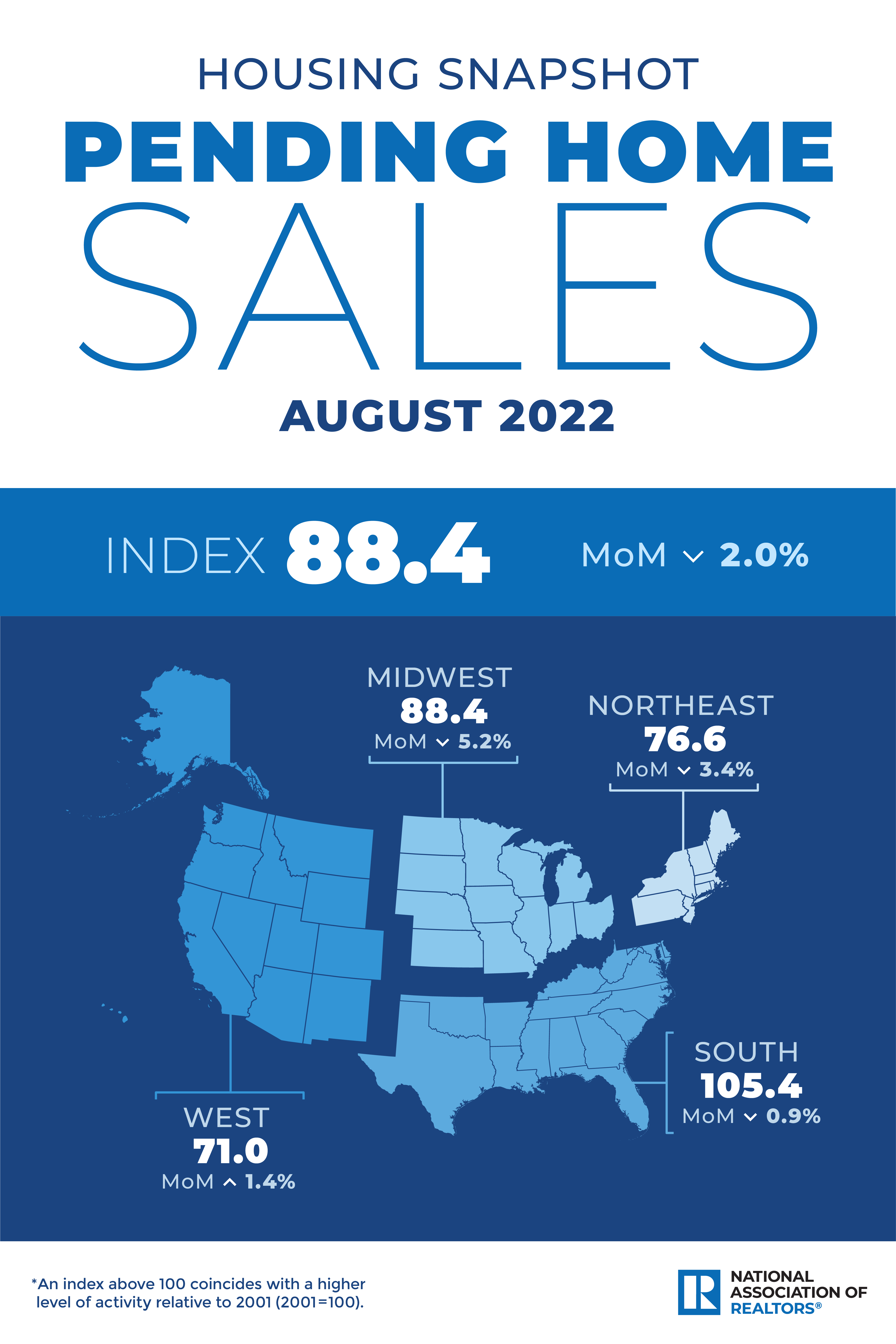 Speaking of regions, the West has proven more resilient recently, with sales and new housing starts both holding steady this month as other regions have dipped.

But the West has also seen the biggest slide from a year ago—down 31.3% from last year. The South is 24.2% lower than a year ago, while the Northeast has pulled back 19%. The Midwest has seen a decrease of 21.1%.

“Home prices are the least affordable in the West and, consequently, the region suffered deeper annual declines in contract signings due to rising interest rates when compared to other areas of the country,” Yun noted. “However, the recent increases of the last two months, though small, are encouraging.”

While some have said it is disingenuous to compare this year’s more normal real estate market to the historic boom of 2020 and 2021, economists have pointed out that 2022 is still a softer year for housing, with most metrics falling below the pre-pandemic market—albeit much less dramatically.

“Pending sales…continue to track below 2019 levels,” said Sturtevant. “Homes are taking longer to sell, with the median days on market higher than it has been since early 2020.”

Yun added that there is little hope of a short-term turnaround based on other macroeconomic factors—with interest rates being the largest. Fed Chair Jerome Powell has promised to keep raising rates, potentially to a restrictive level, and Yun said it is likely that rates will push up close to 7% by the end of the year.

“If mortgage rates moderate and the economy continues adding jobs, then home buying should also stabilize,” he predicted. “Only when inflation calms down will we see mortgage rates begin to steady.”