Where is the light at the end of the tunnel?

That is the question that many real estate leaders are asking, as RISMedia’s Broker Confidence Index (BCI) tracked another new low this month, with major brokerages reporting significant struggles with consumer confidence, interest rates and an overall level of uncertainty that has depressed housing activity.

The BCI fell to 5.8 in October, from 6.2 in September. The index has now slipped a full point from the summer, when there was still some hope for near-term solutions to inflation and other negative economic indicators that have since proved far more resilient than policymakers hoped. A vast majority of brokers say they are increasing the way they support their agents as they prepare for an extended transition.

More than facing market-level challenges—which many brokers have overcome before—the plummeting confidence levels seems to at least partially stem from a lack of clarity about the future. Very few brokers are expressing trust in the media, the government or other institutions to solve the ongoing crises, with many singling out rising mortgage rates that are exacerbating a long-simmering affordability crisis.

“Due to the increase in interest rates, real estate transactions are down around 35% – 40%. Our business is definitely impacted,” said Ed Forman, president of Watson Realty Corp., in Jacksonville, Florida. “Price drops are moderate. We are reducing our costs and taking appropriate steps due to the market shift.”

There is no question that interest rates, which have hovered around 7% recently, are pricing buyers out of the market. Many experts have also posited that so-called “golden handcuffs” are keeping many recent homebuyers from selling, as they seek to hold onto low rates that were locked in last year.

But brokers made a distinction between these challenges and the challenge of how these issues are perceived by agents or consumers. Many claimed that the sudden, sensational shift in the market—with the 2008 crash still fresh on many people’s minds—is making the market more sluggish than it should be, with little attention paid to historical context.

In the decade preceding the 2008 market crash, mortgage rates averaged 7.2%, according to data from Freddie Mac—though consumers and agents haven’t seen this degree of volatility since the early 1980s.

Scott MacDonald, broker/owner of RE/MAX Gateway based in Virginia, said that “economic uncertainty along with the negativity the media spews out that consumers buy into” is most affecting his confidence. Mary Ann Hebert, broker/owner of Better Homes and Gardens Bannon & Hebert in Connecticut, cited the fact that “many agents have never worked in a declining market.”

Scott Myers, broker/owner of CENTURY 21 Scott Myers in Texas, said “lots of publicity” around real estate challenges is making agents lose confidence in a market that is even more limited in terms of inventory than it was months ago.

Other brokers simply saw a difficult real estate environment that requires harder work from everyone. Michael Allen, president of CENTURY 21 Jordan-Link & Co. in California, said that sales volume in his market is running 50% of forecast.

“The latest hikes in mortgage interest rates have definitely contributed toward a reduction in market demand, coupled with getting back to fourth quarter seasonality post-COVID,” he explained.

“Resilient agents continue to meet resilient people who want to move forward with real estate goals, whatever the economy,” said Ron Howard, vice president of sales at John R. Wood Properties in Florida. “Resiliency, in people, and in the industry, is apparent and encouraging.”

With the real estate contraction established as much more than a blip, brokers this month reported on whether or not they had added any particular support for agents in the last six months or so, and what types of support they saw as most vital during a downturn. 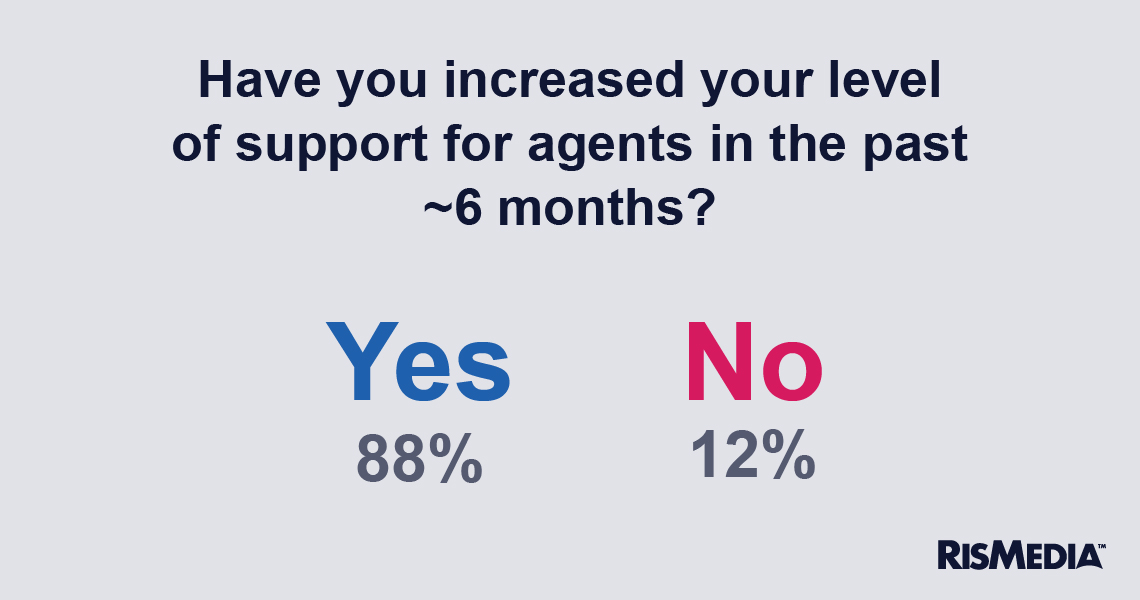 An overwhelming majority (89%) said they had indeed added more resources for their agents since the market began to turn back in the spring.

As far as what support works, the choice was clear—44% cited training as the best resource for agents during a slower market. One out of four (25%) brokers said marketing support was most important, highlighting the importance of brands and visibility when there are less listings and more competition among agents.

In a world where mortgage rates are incredibly volatile and consumers are desperate for guidance, 17% of brokers said providing relevant market information is the most important support for agents.

About one in 10 (9%) brokers said having support staff was the best way to support agents, while only a handful of brokers cited technology and physical space (3% and 2%, respectively) as most important. 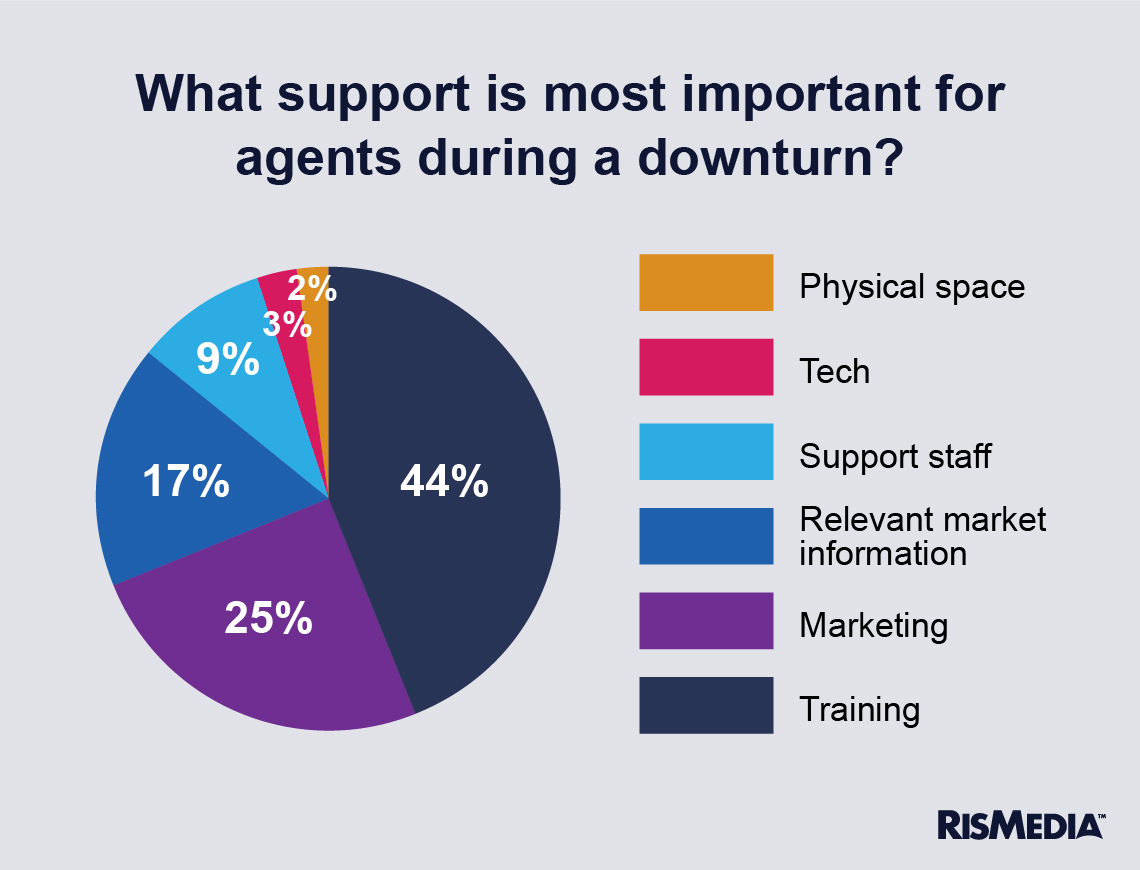 While many brokers remain understandably frustrated, blaming either mismanagement by the Federal Reserve or other government policy for inflation and interest rates, others continue to say they have no choice but to make the best of it.

“It is a changing market for sure, but still plenty of opportunities available,” said John O’Reilly, broker/owner of Better Homes and Gardens Base Camp in Virginia. “Market change is inevitable, but we must change to stay productive and not worry about losing ground, but how we can grow to capture more of the sales that are available.”