Nationwide, real estate is struggling, and more and more markets are feeling the squeeze. While every region is experiencing the ongoing “housing recession” differently, brokers broadly see the writing on the wall this month, as RISMedia’s Broker Confidence Index (BCI) plunged again, the second largest month-to-month drop since its launch last year.

Dipping to 6.2, from a reading of 6.6 in August, brokers say they are deeply concerned about rising mortgage rates, which are projected to keep spiraling higher through at least the rest of this year as the average 30-year fixed pushes toward 7%.

In fact, more than half of brokers who participated in the BCI cited rates as one of the primary factors affecting their confidence level in September.

“Interest rates are the real issue,” said Tim Milam, CEO of Coldwell Banker Sea Coast Advantage in Wilmington, North Carolina. “And with them being so high as compared to earlier in the year and as far back as 2008, this has become a major issue. Until we see rates dip some, we will see sluggish sales.”

When RISMedia launched the BCI in December of 2021, brokers were riding high on a year of unprecedented sales and price growth that buoyed nearly every market, demographic and price point. But since then, real estate leaders around the country have grown progressively less optimistic as a hard line of historic interest rate hikes by the Federal Reserve, and broader concerns about affordability have depressed sales.

“The Fed waited too long to curb inflation, they are now playing catch-up,” said Dana Potter, owner and founder of Pinnacle Estate Properties in California. “Rates are super high, and need to become more affordable. The low rates of the prior years now keep people in their home longer.”

Spotlight on the media

In previous editions of the survey, some brokers have specifically blamed mainstream media outlets for their sensationalist, overbroad or highly negative reporting on the housing market. This month, we asked just how accurate—or inaccurate—journalists have been in their coverage of real estate.

A slight majority of respondents (57%) said that mainstream media coverage of the housing market is somewhat or very inaccurate. Four in ten (40%) said media outlets have been “somewhat accurate” in reporting on housing.

Notably, not a single broker felt that mainstream journalists have been “very accurate” in their real estate coverage, though a significant portion—13%–thought reporting was “very inaccurate.” 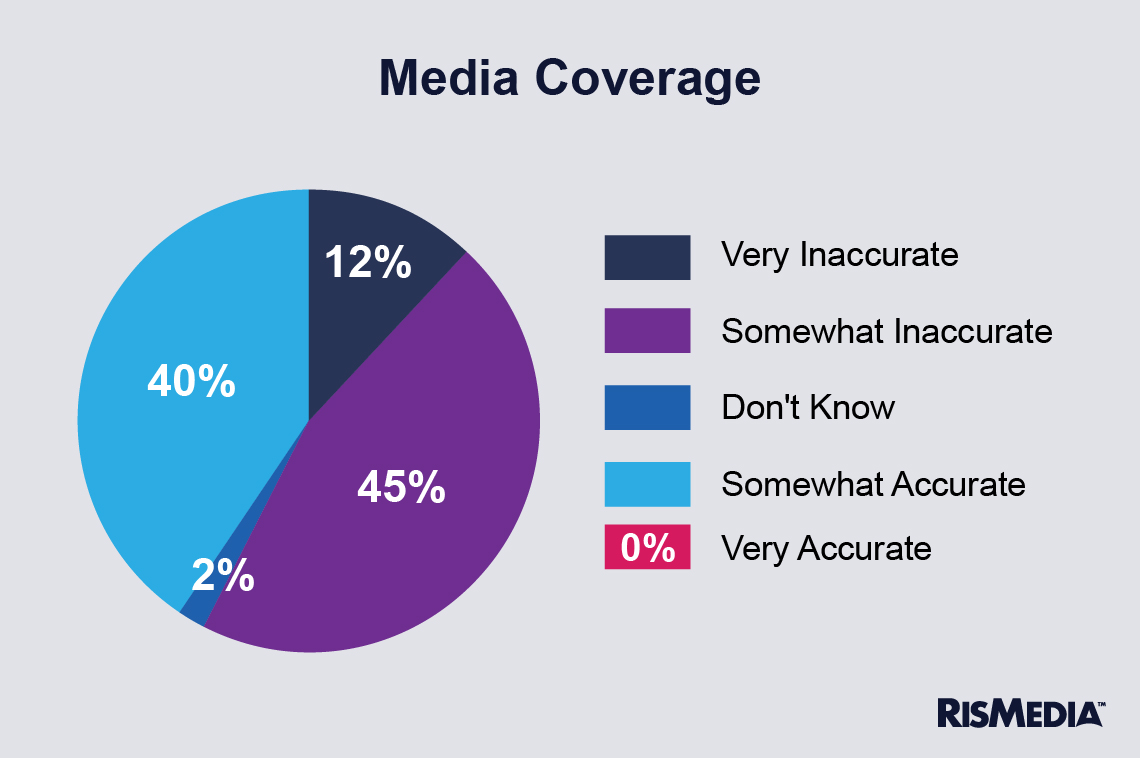 “Too many news outlets have sensationalized what is happening in the real estate market,” said Scott MacDonald, broker/owner of RE/MAX Gateway in Virginia. “As always, real estate is hyperlocal and the public should rely on a trusted advisor, not click the web.”

Whether or not a broker felt that media was effectively covering real estate made no difference in their feelings about the broader market, with both groups expressing the same confidence level in the industry overall.

Chuck Cornwell, broker/owner of RE/MAX Regency in Virginia, said one of his biggest concerns was media members effectively misinforming consumers in a fast-changing market.

“Too much confusion in the market,” he said. “Media is reporting more inventory; we actually have less inventory. Buyers cannot find homes to buy, sellers are not listing till they find a home to move to. The market has frozen!”

In recent months, the proportion of brokers expressing stronger feelings one way or another—either very positive or negative about the marker—has grown. That trend continued in September, with 27% of brokers rating their confidence in real estate as either 8, 9, or 10 (with 10 being the highest possible confidence). In August, that number was roughly the same, with 28% of brokers feeling that powerful optimism.

“There is always real estate needs, to buy and sell,” said Katie Clark, executive vice president at e-Merge Real Estate in Ohio. ”Professionals are busy no matter what the rates are or what the news has to say about the state of the economy.”

Even more brokers are expressing very low confidence levels, however, with 15% rating their confidence as 4 or lower in September, compared to 10.6% in August. These brokers cited low transactions, government mismanagement and, of course, interest rates as weighing on the market.

Many brokers—particularly those who rated their confidence somewhere in the middle—took a slightly longer term view, saying they were adopting a “wait and see” attitude while remaining optimistic that driven agents and well-positioned companies will be able to thrive even during the ongoing downturn.

“I believe interest rate increases have gone too high, too fast,” said Jim Quinn, broker with Keller Williams in Florida. “Also, I believe potential buyers and sellers are waiting for the midterm election results before they make any significant moves.”

Fed chair Jerome Powell recently said that the central bank anticipates moving rates to a “restrictive rate” (adding 125 to 150 more basis points this year) and keeping rates there “for sometime.”

Rod Messick, CEO of Berkshire Hathaway HomeServices Homesale Realty based in Pennsylvania, said “lack of confidence in the Fed” was affecting his view of the near future.

“I believe will end up forcing a hard landing that leaves a deeper recession than necessary,” Messick predicted. “This will create an opportunity for well-run brokerages and great agents to thrive but will leave some carnage along the way.”