Despite some positive news on inflation and mortgage rates that fell significantly late last month, most macro signs still point toward a rough winter for real estate, with no clear indication of when the turnaround will come.

That uncertainty was reflected in RISMedia’s Broker Confidence Index (BCI) this month, as respondents’ confidence level slipped from 5.8 to 5.3.

Exactly what is causing the current “housing recession” seems obvious, but is also a confluence of factors. This month, RISMedia asked brokers to indicate what had been the biggest challenge to them in 2022, and maybe unsurprisingly, there was no single factor blamed for the pullback.

One-third (33%) cited interest rates as the No. 1 obstacle to their business in 2022. After helping fuel the real estate boom in 2020 and 2021, mortgage rates shot up after the Federal Reserve began a historically aggressive series of rate hikes in the spring, doubling between February and November of this year.

One-fourth (25%) of brokers surveyed pointed to inventory shortages as an impediment to their success. Probably the most persistent of the current issues facing housing advocates, many economists and real estate practitioners have worried that a lack of new homebuilding and other broader demographic factors could leave a dearth of homes for years to come.

A significant number of brokers (20% of respondents) pointed to a lack of consumer confidence, which has shrunk the pool of both buyers and sellers in many regions as people shy away from major financial decisions in times of uncertainty. The war in Ukraine rattled geopolitical foundations at the same time mortgage rates were shooting up, and the possibility of a full-on recession or housing crash has left many people skittish.

Finally, only a handful of brokers (5%) cited agent recruitment and retention as a struggle for them this year. 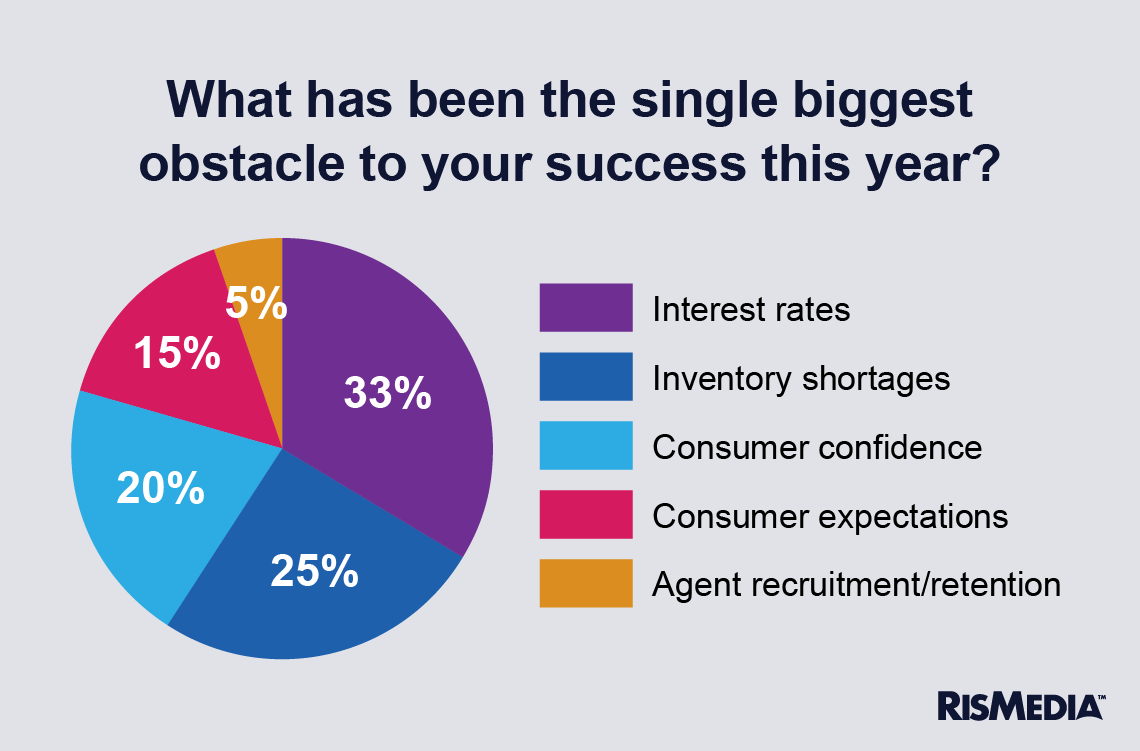 Brokers who struggled with interest rates had much lower confidence overall, with that cohort weighing in with a dismal 3.4/10 confidence level in real estate overall, reflecting the fact that mortgage rates are not something brokers can do much about, if their market is sensitive to that metric.

The most confident group was those who had said that inventory shortages were their biggest challenge, with a whopping 8/10 confidence level. This could potentially reflect input from brokers in areas that have a more inherently inelastic housing supply, or where a lot of cash buyers ignored soaring mortgage rates.

Brokers also shared, briefly, some of the adaptations or adjustments that helped them overcome a tough market this year, as 2023 looms just around the corner. For many, success came from simply refocusing on the fundamentals, with Florida broker Raymond A. Rivera saying that he spent 2022 “recruiting and getting back to basics.”

James Morton, another Florida broker, says his success came from “working hard and not listening to national forecasts.”

A handful of others mentioned training or cost-cutting. OJ Rodriguez, a broker working in Southern California, says that both a “diversified income stream” as well as recruiting and M&As carried his business through 2022.

Zach Hensrude, a Washington-based broker, says he was “doubling down” on systems and education, with the hope that regionally at least, the downturn won’t be too bad.

“I am cautiously optimistic about my local market,” he adds.