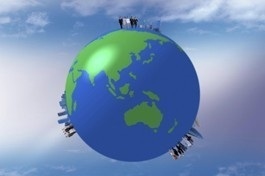 RISMEDIA, July 9, 2010—International home buyers are increasingly attracted to property in the U.S., according to the National Association of Realtors’ 2010 Profile of International Home Buying Activity. Several factors, including the strength of the dollar, the value and desirability of U.S. real estate, and the emerging economic recovery, continue to drive international interest in owning a home in this country.

“While all real estate in the U.S. is local, the same is not true for property owners,” said NAR President Vicki Cox Golder. “The U.S. continues to be a top destination for international buyers from all over the world. Foreign buyers understand the value of owning a home in this country and can rely on Realtors to help guide them through the complex process of buying property in the U.S. With expertise, knowledge and experience, Realtors have a global perspective.”

The survey covers the period between April 1, 2009 and March 31, 2010. During that time, foreign buyers, including those with residency outside the U.S. as well as recent immigrants and temporary visa holders, are estimated to have purchased $66 billion of U.S. residential property, or 7% of the residential market.

Slightly more than a quarter of Realtors, 28%, reported working with at least one international client in the past year. This is a significant increase from the 2009 report, when 23% of Realtors worked with foreign clients. Eighteen percent of all Realtors were estimated to have completed at least one sale, compared to 12% last year.

“Several factors have contributed to an increase in international buyer interest in the U.S.,” said Golder. “A large majority of Realtors report the changes in value to the U.S. dollar have had a strong impact on the international real estate business. In addition, perceptions abroad about trends in the U.S. real estate market have led many international clients to believe purchasing a home in the U.S. is more affordable than in their country and holds more value.”

International buyers came from 53 different countries around the world. The top four countries were Canada, Mexico, the U.K. and China/Hong Kong. With 23% of international buyers coming from Canada, the country has remained the largest buying group in the past three years. Foreign buyers from Mexico have been steadily increasing. In 2010, Mexico replaced the U.K. as the second largest buying group with 10% of buyers. Buyers from the U.K. decreased from 10.5% in 2009 to 9% in 2010. Eight percent of recent buyers came from China/Hong Kong.

Two factors important to international clients when purchasing property in the U.S. are proximity to their home country and the convenience of air transportation. Florida typically attracts European, Canadian and South American buyers while the East Coast draws Europeans. The West Coast brings Asian buyers and the Southwest attracts Mexicans.

International buyers were reported in 39 states in 2010, but a slight majority of the total buyers are concentrated in Florida, California, Arizona and Texas. These four states account for 53% of purchases and have remained the top destinations for the past three years, with Florida and California remaining the top two destinations.

Share the New Drive With NAR Podcast with Your Agents

More Than Half of Mortgage Borrowers Didn’t Shop Around