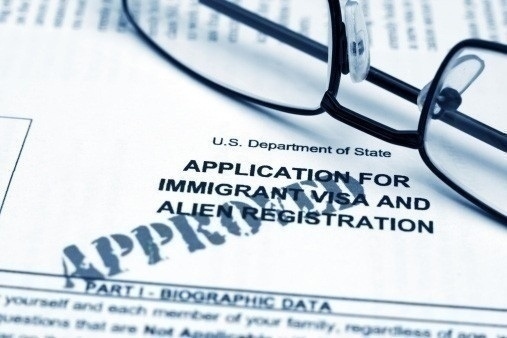 If current legislation that creates a path to legalization for 11 million undocumented immigrants is passed, the nation’s Hispanic real estate leaders estimate that it would create a new pool of 3 million homeowners and pump more than $500 billion in sales, income and spending into the U.S. housing economy. According to an info graphic released by the National Association of Hispanic Real Estate Professionals (NAHREP), the chain reaction triggered by home purchases would drive demand for more than $500 billion in real estate transactions and an additional $233 billion in origination fees, real estate commissions and consumer spending associated with homeownership.

Based on previous estimates from analysts, NAHREP officials calculate that as many as 6 million undocumented immigrants are likely to pursue legalization and possibly citizenship under the bill and up to 3 million would pursue homeownership based on the patterns of naturalized Latinos.

“Foreign-born householders have a high value and strong desire for homeownership,” says Juan Martinez, NAHREP president. “They have been here in our midst for years, working and participating in our economy. Legitimizing them through immigration reforms would finally give them the access and the confidence to buy homes.”

NAHREP, a nonprofit 501(c)6 trade association with 20,000 members, based its projections on updated data and the approach it used for its 2004 study “The Potential for Homeownership Among Undocumented Workers,” to estimate the economic impact on the current housing economy.

• Assuming past purchase trends among foreign-born householders remain consistent, half or up to ?3 million of the 6 million undocumented immigrants that are expected to pursue legalization, will also buy a home once they have legal status;

• Many of the undocumented foreign-born householders have age and income characteristics associated with potential homeownership with household incomes of about $40,000;

• Up to 3 million undocumented foreign-born householders could potentially afford a home worth $173,600, the national median sales price of a home. This would generate more than $500 billion in new mortgages, and about $25 billion in mortgage origination and refinance income;

• Assuming an average of 5.5 percent in sales commissions for these home sales, these purchases would create $28 billion in income within the real estate community;

• Home purchases by 3 million legitimized immigrants would create $180 billion in additional consumer spending within local communities based on the average $60,000 in associated purchases estimated by the National Association of REALTORS® in 2012.

“If we can get past the anti-immigrant sentiment that has so strongly colored the national conversation around immigration reform, we will see just how much our U.S. economy has to gain by legitimizing these people,” addsMartinez.

Other housing and corporate leaders that work closely with the underserved market agree that legalization will spark swift interest in homeownership among these Latinos because they are already established in communities here in the U.S.

“Homeownership is an integral part of the American Dream in the undocumented immigrant community. Our estimates in 2004 were very conservative and we received many calls from consumers who wanted to know what lenders were offering these loans,” says Gary Acosta, NAHREP co-founder and a veteran housing leader who was chairman of NAHREP when the study was conducted. “With the possibility of a legitimate path to residency and citizenship, we expect this group to be eager to buy homes.”

“Immigration reform would unleash pent-up demand for homeownership by millions of undocumented immigrants. It would help re-establish homeownership as a driving force in building wealth and accelerate the recovery of the nation’s economy,” says Alejandro Becerra, a former senior housing fellow, researcher, author and recipient of the 2011 HOPE Award.

In its annual policy statement issued last March, NAHREP leaders advocated for immigration reform at the federal level that would create a path to citizenship for undocumented immigrants and their children and bring them out of the shadows.

Share of Mortgage Loans in Forbearance Decreases to 1.41% in December