The Top 25 Most Creative Cities in America

If you’re a creative person, looking for a city that ignites your creative flair, where should you live? Perhaps you dream of becoming a writer—which city will provide the muses and inspiration you need? Maybe you want to go to an art school in a city where you’re surrounded by artists in your community and not just your classes. We set ourselves the challenge of finding out what cities creatives flock to, or should flock to, to live.

But first, how do we define creativity? The term has been used to describe personality types, professions, fields of study, and hobbies, but it’s also used when creating something, problem-solving, and reaching that “eureka” moment. For the purposes of this study, we defined creativity as producing work that is original and relating to four factors: the person, the process, the environmental influences, and the product created.

We analyzed data from the U.S. Census Bureau and Bureau of Labor Statistics and determined four measurable metrics: creative jobs, creative schools, performing arts companies, and motion picture and video companies. These four metrics all reflect original work from a person, a process, environmental influences, and a product. We then took these metrics and ranked cities to determine the 25 most creative cities.

Where Should Creatives Hang Their Hats?
And the winner is…New York City! In a hard-fought battle of creative clout, even though it didn’t win any one category, overall New York City came out on top as a melting pot of both jobs, schools, venues, and opportunities for creatives. It was the second city with the most creative jobs, the fifth for creative schools, third for performing art companies, and third for motion picture and video industries. The biggest surprise in the top five, and a bit of a unicorn really, was Minneapolis, at No. 5 overall. When it comes down to deciding where to live, while New York is a classic for a reason, the average housing price is $1,624,710, while average in Minneapolis is $517,222. For the starving artist types, seems like Minnesota might be the place to get the best bang for your buck. 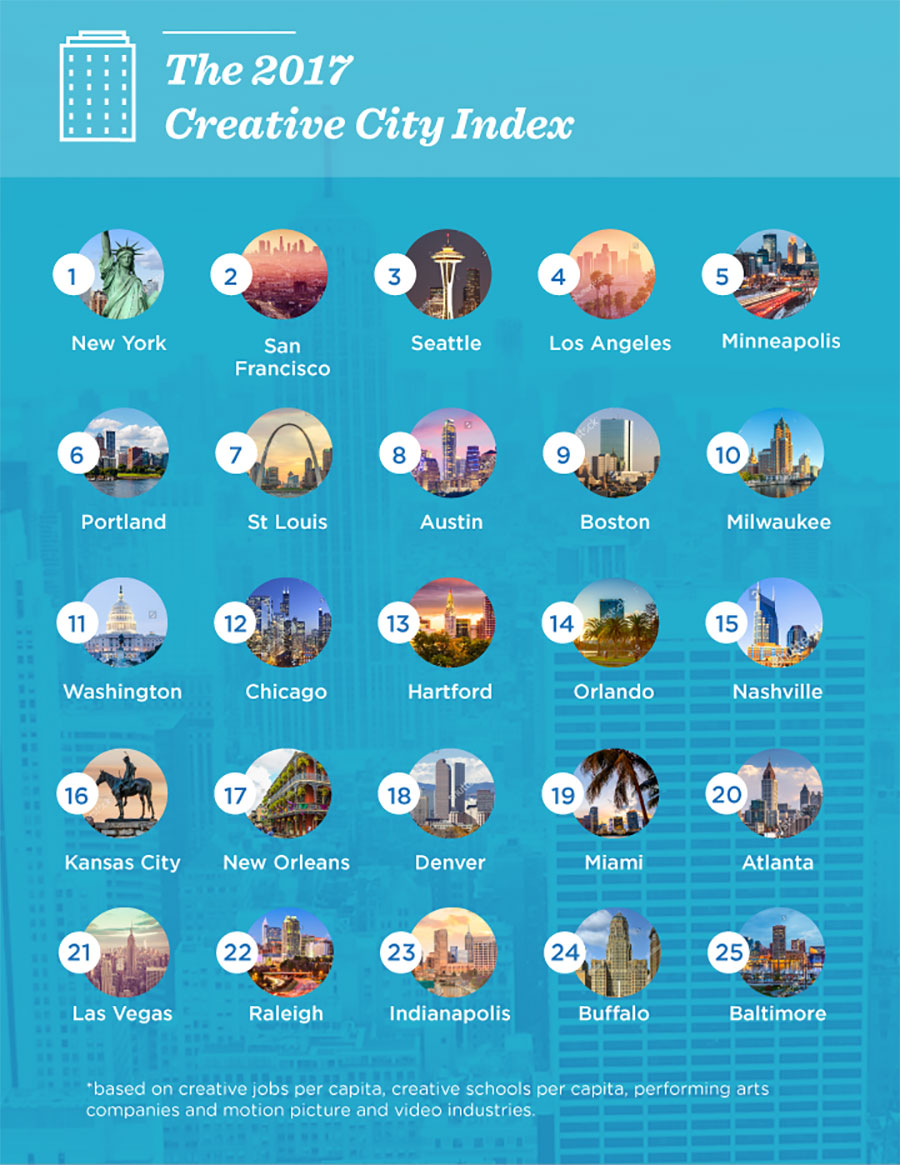 Which City Has the Most Creative Jobs?
Los Angeles Is the Best for Creative Employment Opps

With more artists and film-related jobs than any other city per capita, Los Angeles was pretty much guaranteed to be the top city for creative jobs. The top 10 also contained New York, Seattle, Milwaukee, and Kansas City, among others, demonstrating that there are rich hubs of creativity all across the country. 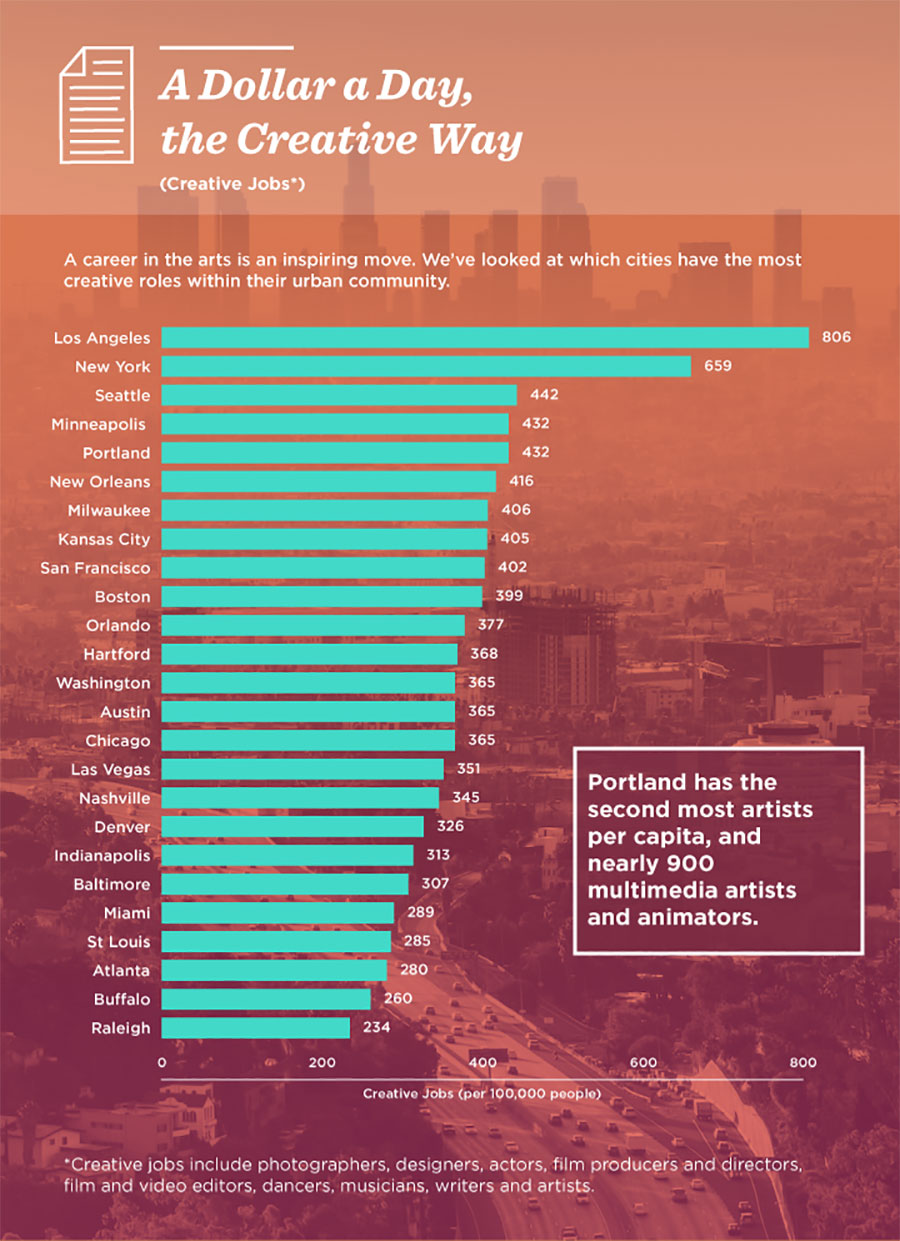 Where Are the Most Creative Schools?
San Francisco Educates the Creative Mind

San Francisco has often been hailed as a creative beacon, and after comparing it against the other cities on the roster we deduced that, given that it has the most creative schools on our list, it lives up to the hype. Students can decide between schools such as the California College of Arts, the Academy of Art University, the San Francisco Art Institute, and more, depending on their specialty. 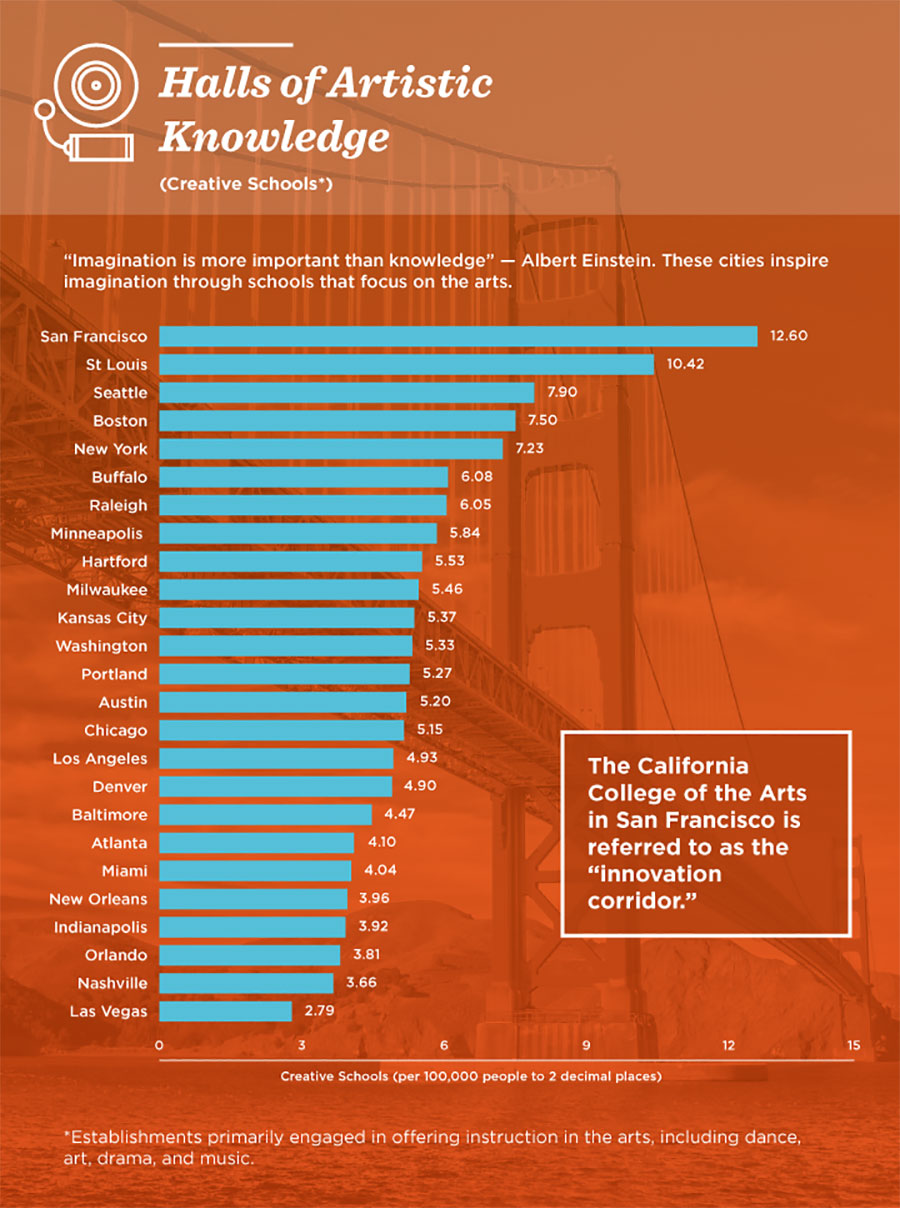 Which City Has the Most Performing Arts Companies and Venues?
Nashville Is the Music and Arts Stage

Nashville has grown and evolved just as much as the music that is the common thread connecting the life and soul of the city and its people. The creative scene is flourishing, and is home to more performing art companies per capita than all the other cities—almost double San Francisco, which is the No. 2 spot. In other good news, the average housing price in Nashville is $456,740, which is almost half the average price of San Francisco, which comes in at $851,543. Interestingly, New Orleans was in the bottom half of the list, even though it is considered to be the home of jazz and Mardi Gras. 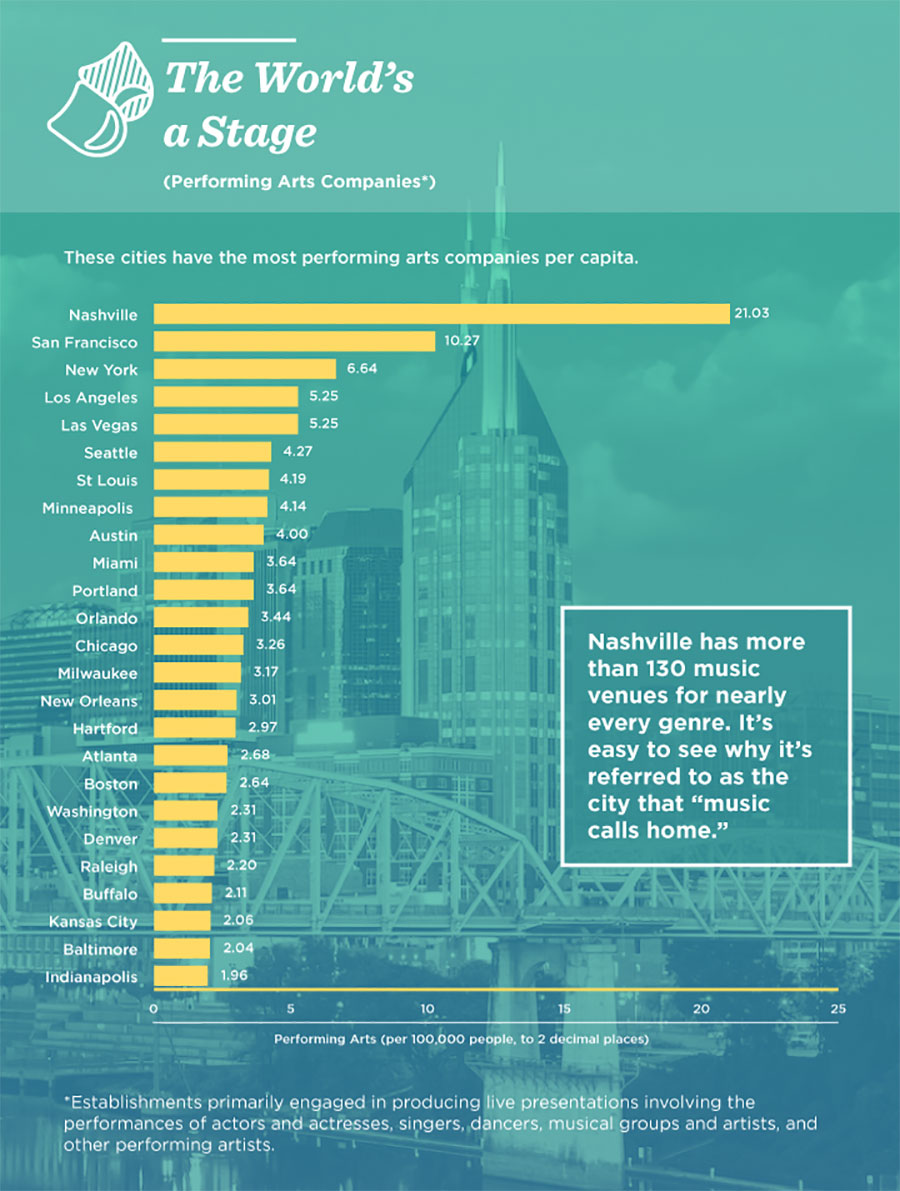 Which City Has the Most Film and Video Companies?
Los Angeles’ Hollywood Reigns Supreme

Los Angeles, of course, had the most motion picture and video companies per capita. Home to Hollywood, this wasn’t exactly shocking, but in terms of cost of living, film types may have may be able to trade in the typical LA shoebox apartment for some extra space in St. Louis, which was the No. 4. Out of 1,5111 cities overall, St. Louis ranks 223rd overall for homes over $200,000, and is the 59th most populated. 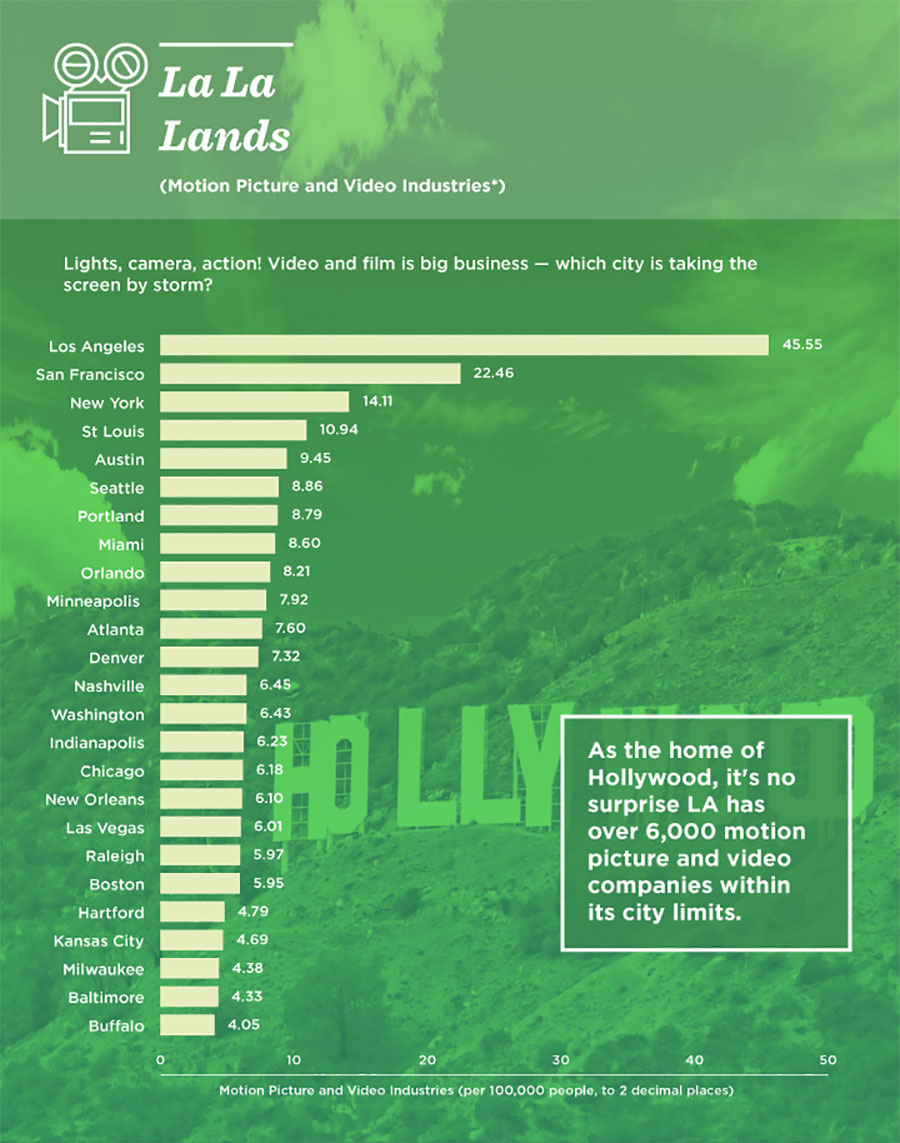 It’s important to remember that creativity can be measured in hundreds of ways. It comes from the people, from what you do, from what’s around you, and of course from what you make. No matter which city you’d like to live in, the power to exercise creativity always lies within yourself.

A version of this article originally appeared on Homes.com.

Nomination Deadline for ‘Rookie of the Year’ is Tonight