Marriage Equality and Its Impact on Real Estate

a young same sex couple celebrate getting the keys to their new house . They are standing in their garden in front of a semi detached house holding the keys. 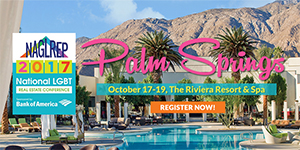 It has been a bit more than two years since Jim Obergefell, a former Coldwell Banker West Shell agent in Cincinnati who has since moved to Washington, D.C., won his landmark Supreme Court case, Obergefell v. Hodges, that made marriage equality the law of the land.

Those of us in the National Association of Gay & Lesbian Real Estate Professionals (NAGLREP) were obviously thrilled that one of our own members led the fight that changed our nation—but we also knew the decision would ultimately pay major dividends in the real estate industry.

Think about it. Homeownership has always been predicated by the circle of life. Marriages, kids, more kids, new jobs, promotions, divorces and so many other events trigger home-buying and -selling. While the LGBT community—and so many others—cheered the simple act of marriage equality, we knew there was so much more coming on the horizon.

And now it is here.

Our LGBT Real Estate Report for 2017 showcases how the real estate industry is poised to reap massive benefits from the 2015 Supreme Court decision.

Our report shows that 47 percent of NAGLREP members believe LGBT couples are buying more homes than prior to the decision and 46 percent believe the entirety of the LGBT community is more interested in homeownership.

And, as you might expect, marriage is leading to children. Nearly 60 percent of NAGLREP members are reporting an increase of LGBTs with children, which may be why 29 percent believe that more LGBTs will move out of urban centers.

Our study found that job change/relocation is the clear driver, followed by retirement, marriage, engagement and children. Divorce and death of a spouse and partner are also on the list.

Here is another exciting development: The LGBT community desires larger and better homes. Nearly 50 percent of our surveyed members report that, of their LGBT clients, move-up buyers will dominate downsizers by an almost three-to-one margin in the near future.

And don’t forget: the LGBT community has almost $1 trillion in annual buying power, which is more than the Asian-American population, according to Witeck Communications.

Embracing the LGBT community seems like a really smart business decision, and I also urge you to consider the power of NAGLREP members. The report found that our members are working heavily in the real estate sweet spot of Gen Xers (35-54), but, more importantly, our members dwarf the productivity of what NAR reports for its members in experience, transaction sides, sales volume and earnings. The comparisons are staggering:

NAGLREP is celebrating our 10th anniversary with explosive growth. We now have more than 1,500 national members, which includes a year-over-year increase of new members by 30 percent. We have thriving chapters in such markets as San Francisco, San Diego, Austin, Denver, Chicago, Washington, D.C., Raleigh, New York City, Philadelphia, Minneapolis, Atlanta, Ft. Lauderdale, Tampa/ St. Petersburg and Kentucky. You can easily become involved by joining at NAGLREP.com.

I also urge you to consider attending our fourth annual conference in Palm Springs on October 17-19. It will be the largest LGBT and allies event in real estate history, with 700 expected.

I have been so impressed over the years of how the real estate industry has embraced NAGLREP. Clearly, the support starts with NAR and in the who’s who of corporate and media partners we have, including RISMedia. We also see the interest at the grassroots level in state and local real estate associations.

I strongly believe that those who embrace the LGBT community will continue to reap great rewards, because we are just beginning to realize the enormity of how marriage equality will change our lives and our home-buying and -selling needs.

Jeff Berger is the founder of the National Association of Gay & Lesbian Real Estate Professionals (NAGLREP).