Zillow recently released survey results ranking the hottest housing markets in 2021, with Austin taking the lead. The following metro areas are also forecasted to outperform the nation in home value growth according to industry economists and experts: Phoenix, Nashville, Tampa and Denver.

These top five metros share several traits, the first being their affordability in comparison to expensive coastal areas. Additionally, they’ve taken the lead on home appreciation and are mostly in sunny locales—four of the five rank in the top-third of counties for average daily sunlight. 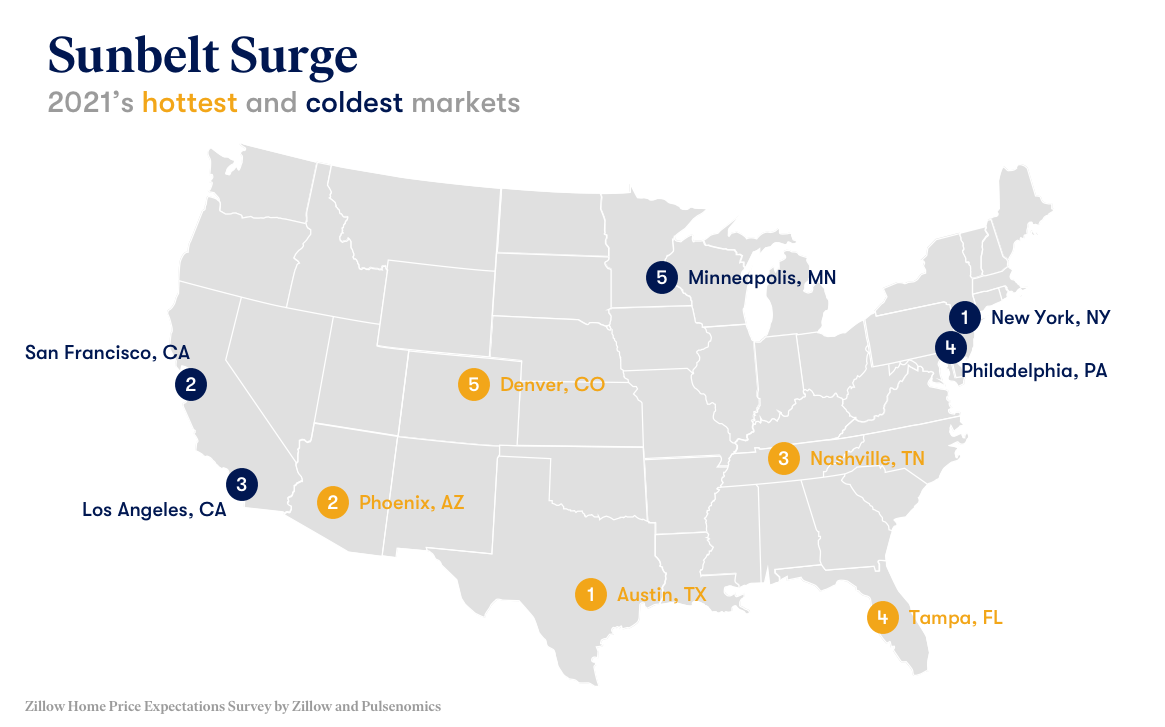 “The pandemic has not upended the housing market so much as accelerated trends we saw coming into 2020,” said Zillow senior economist Jeff Tucker. “These Sun Belt destinations are migration magnets thanks to relatively affordable, family-sized homes, booming economies and sunny weather. Record-low mortgage rates and the increased demand for living space, coupled with a surge of millennials buying their first homes, will keep the pressure on home prices there for the foreseeable future.”

“During the pandemic I think a lot of people spending a big portion of their paycheck on rent or mortgage in cities like New York and San Francisco started working from home and suddenly had options. Their dollar goes a lot further in the South, the climate is better, and Austin has a lot to offer—from the food scene to outdoor activities and live music,” said Thomas Brown, a Zillow Premier Agent in Austin and CEO of The Agency Texas. “Those factors are going to continue drawing people into the Austin market in 2021.”

Experts believe there will be a move away from expensive coastal cities, with 82 percent of survey respondents saying New York would experience sub-par growth in 2021, and 77 percent and 67 percent saying the same for San Francisco and Los Angeles, respectively.