Pending home sales increased in October, rebounding from September’s decline, according to the National Association of REALTORS® (NAR). Overall, contract activity increased monthly in each of the four major U.S. regions. However, on a yearly basis, two regions (West and Northeast) reported drops and two others (Midwest and South) increased.

The Pending Home Sales Index (PHSI), which is a forward-looking indicator of home sales based on contract signings, rose 7.5% to 125.2 in October. An index of 100 is equal to the level of contract activity in 2001. Year-over-year, contract signings declined 1.4%. 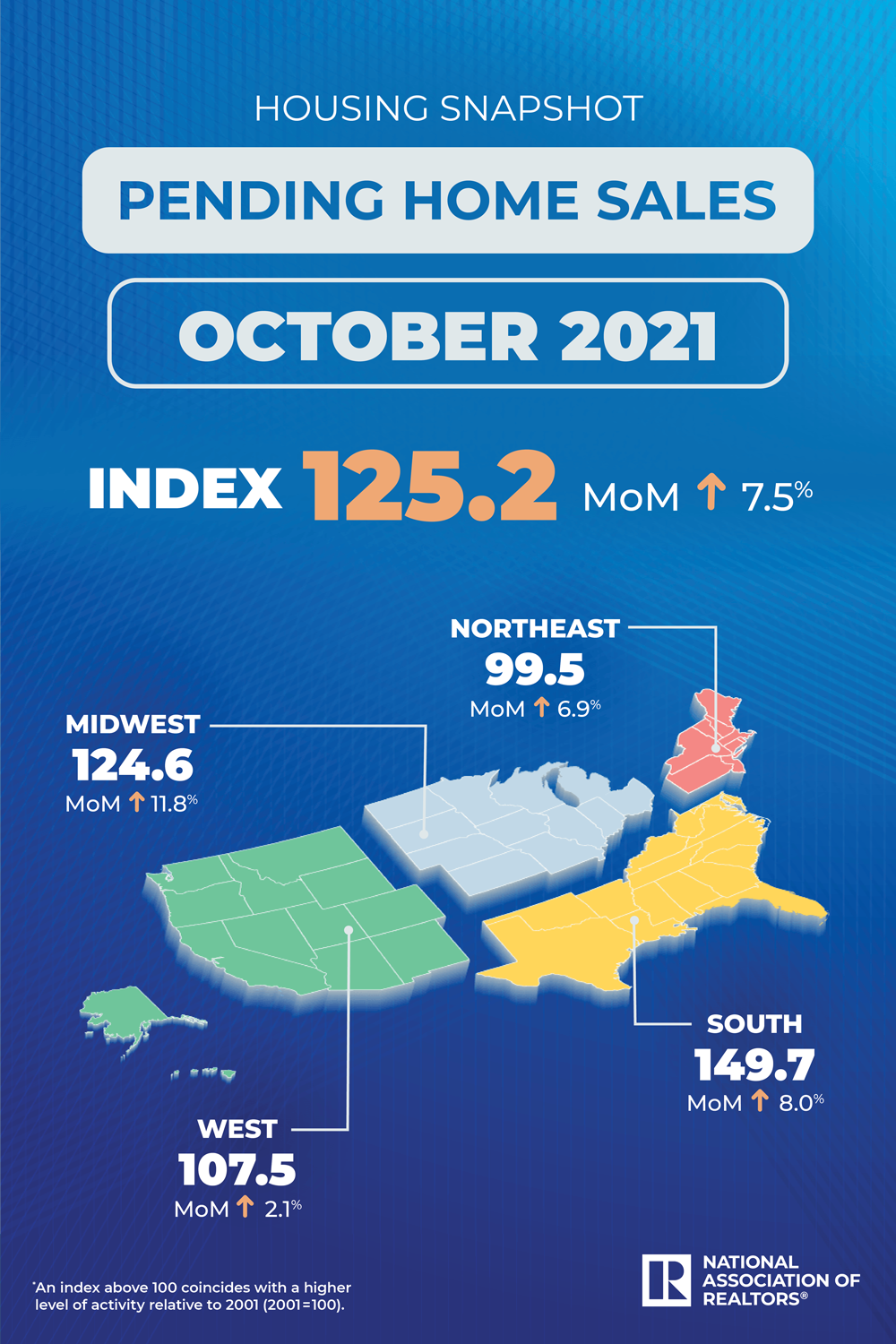 What the Industry Is Saying:

“Motivated by fast-rising rents and the anticipated increase in mortgage rates, consumers that are on strong financial footing are signing contracts to purchase a home sooner rather than later. This solid buying is a testament to demand still being relatively high, as it is occurring during a time when inventory is still markedly low.

“The notable gain in October assures that total existing-home sales in 2021 will exceed 6 million, which will shape up to be the best performance in 15 years.” — Lawrence Yun, NAR Chief Economist

“As we moved into the fall this year, housing remained competitive, with tight inventory and a quick turnover pace, even as mortgage rates rose 15 basis points over the month. Real estate markets have left the overheated spring 2021 behind, as an increase in the number of homeowners ready to move forward with pandemic-delayed plans boosted new listings and tamed skyrocketing price growth. However, a shortage of new and existing homes for sale continues to hamstring both first-time buyers and many homeowners struggling to find their next house.

“In an acknowledgment of market realities, the Federal Housing Finance Agency updated the yearly loan limits for mortgages which are eligible for backing by Freddie Mac and Fannie Mae. For most of the country, the new limit moves from $548,250 in 2021 to about $625,000 in 2022. In expensive metro areas, the maximum loan limit will move from $822,375 to under $1 million. The higher limits will give buyers who face higher-priced homes the opportunity to qualify for a conforming mortgage, which provides for lower down payments and better mortgage rates, among other benefits. However, over the longer term, housing needs a larger investment in new construction to overcome the significant supply shortage.” — George Ratiu, realtor.com®, Manager of Economic Research

The Art of the Deal

5 Tips for Working With Experienced Buyers