Located in a Hudson Valley hamlet of Blauvelt, the Socrates Zaferiou House is a custom-built, Usonian-style Frank Lloyd Wright prefab design that was built in 1961. Wright, widely considered the greatest American architect of all time, was best known for his philosophical-yet-functional design aesthetic that highlighted the more domesticated values of the 20th century.

RISMedia spoke with Richard Ellis of Ellis Sotheby’s International Realty, who co-listed the home with partner Brandon Wagner, about the importance of preservation, some of the home’s standout features and what went into marketing this unique space.

Joey Macari: What makes this a Great Space?
Richard Ellis: The Socrates Zaferiou House, a customized version of the Frank Lloyd Wright Usonian-style home, is a great space because it’s Frank Lloyd Wright’s Usonian style “on steroids.” With larger rooms and taller ceilings, it also features a full-size basement. In addition, it is pure Frank Lloyd Wright. In fact, nothing has changed since it was built in 1961 by the same project architect who worked on the Guggenheim Museum. While the home was completed shortly after Wright’s death, it can also be considered a great space due to its location on 2.5 private acres within a 532-acre state park. Set on a hill, the structure fits into the site beautifully—and as the tall trees reach to the sky, the rooflines reach for the trees so that the structure is truly one with nature, which is the premise of Wright’s designs.

What also makes the space really great are the owners. Socrates Zaferiou, the original owner and a hard-working Greek immigrant who commuted to the Plaza Hotel in New York City almost every day for 40-plus years, never gave up trying to get Wright to approve a larger version of the Usonian style, with a fourth bedroom and a full basement. Finally, after almost two years, Wright agreed. The second owner, Sarah Anderson-Magness, proved to be the perfect caretaker—as she has been as passionate about the home as Socrates.

JM: How does the home’s historic significance factor into its marketability?
RE: The home’s connection to Frank Lloyd Wright makes it a star, especially in today’s real estate market where branding is very important. When we listed and sold the home the first time, not only did we have a very small number of showings compared to now, but also, nearly 20% of potential buyers either didn’t like the inherent style of Frank Lloyd Wright and/or wanted to renovate the kitchen and/or baths.

We had an extraordinary amount of press this time, as the home was featured in Bloomberg, NY Post, Architectural Digest, etc. This resulted in about 150 leads in two weeks and approximately 60 showings. Potential buyers flew in from Greece and California, and we even had FaceTime and WhatsApp video calls to Qatar, London, Bologna, Florida, California and more. Pretty much every single person who saw the house truly appreciated it for what it is today. Why? Because it’s a Frank Lloyd Wright house in prime condition and in an extraordinary setting.

JM: What are you looking for in a potential buyer or caretaker?
RE: We are marketing the property, which has been listed with a low asking price, with the intention of creating multiple bids to try to achieve the highest and best price. In addition to looking for a buyer to pay a record price, I’m looking for a caretaker who will preserve and protect this home for future generations to enjoy, learn from and spread the legacy of one of America’s greatest architects.

JM: What elements of the home stand out most to you?
RE: I love the sleek mid-century exterior design, and particularly how the carport integrates with the house. I love the fact that the living room is sunken, three steps off the entry foyer, and the large fireplace that’s almost six feet tall. I love how Wright designed multiple areas of the house where the walls “step in” or recess, creating much drama as one walks through and the space suddenly opens up with volume.

JM: How is preserving the historic integrity of this property crucial to its eventual sale?
RE: It’s everything. The original owner was looking for a steward who took great care of the home, as is the current owner.

JM: What should real estate agents specializing in historic houses be cognizant of?
RE: Provenance. The story behind the house. They should tell the story of the property to the world. It’s also important to contact the press, as they may be interested in doing a story about it, which will help sell the home if the seller permits. The key is to make the history relevant to lifestyle marketing that living in the home may create. 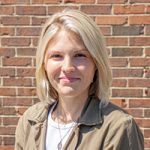